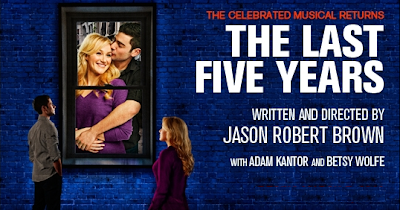 I’ve seen some of my favorite bands in concert over 20 times, crossing county and state lines sometimes just to watch musicians play songs I listened to on my record player over and over and over again. Each time I’d see a band in concert, I’d rediscover songs. It’s one thing to listen to a recording of something but it’s quite another to experience someone bringing it to life, performing it and unearthing layers you simply cannot capture in a recording, no matter how great the sound board or mixing tools or musicianship are. And that’s how I felt when I finally got to see The Last Five Years in performance. 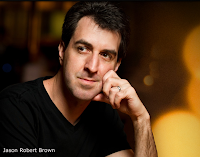 The Jason Robert Brown musical originally played at New York’s Minetta Lane Theatre 11 years ago; it was directed by Daisy Prince and starred Sherie Rene Scott (Dirty Rotten Scoundrels, Everyday Rapture) and Norbert Leo Butz (Dead Accounts, Catch Me if You Can), and for almost 11 years I’ve listened to Scott and Butz on the cast recording. The only time I even heard any of the songs performed live was when Brown (who won a Tony for Original Score of Parade) gave a concert at Birdland a few years ago (with Lauren Kennedy), but it wasn’t fully staged and so still, I realized after seeing this full production at Second Stage, I missed the depth of the piece. But now we have the chance to fully realize the beauty, complexity, brilliance and emotional resonance of Brown’s masterpiece, in a production he directed.

The Last Five Years tells the story of Cathy (Betsy Wolfe) and Jamie’s (Adam Kantor) five year relationship, but there’s a storytelling twist: Cathy’s story unravels from the end to the beginning and Jamie’s progresses from beginning to the end. So when we meet Cathy, a blonde, aspiring actress, it is on the day Jamie leaves her, asking her for a divorce (“Still Hurting”). We say goodbye to Cathy right after she’s gone on her first date with Jamie (“Goodbye Until Tomorrow”). On the other end, we meet Jamie, a Jewish writer, after the couple’s first date (“Shiksa Goddess”) and say goodbye to him after he leaves Cathy (“I Could Never Rescue You”). The two “meet” only once during the show, right in the middle, at their wedding. Every other time, they are, as Brown says, two people who just can’t seem to be in the same place at the same time.

Much like in Merrily We Roll Along (last year’s production of which featured Wolfe), the different time progressions (or devolutions) make the show more layered and beautiful, rather than one note, one way or the other. (To wit, in a post-show talkback, Brown (13, Songs for a New World) mentioned that while in rehearsal for the original production, Prince and the cast ran through the show in chronological order, rearranging the songs and scenes so that Cathy and Jamie were moving in the same time-direction. Afterward, they said to Brown, “That is the most depressing show I’ve ever seen!”)

Instead of being an entirely depressing show or an entirely saccharine and precious piece of fluff, The Last Five Years is heartbreakingly bittersweet; it makes you laugh and cry; it takes you on a roller-coaster of emotions and toys with your affections for or against the two characters. (For example, in “The Schmuel Song,” you’re likely to find Kantor’s Jamie to be utterly charming, but will surely change your mind a little later during “Nobody Needs to Know.”) 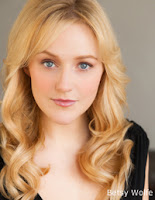 But, of course, just seeing something on stage isn’t always enough to do the trick. There are myriad theatrical elements, including the actors‘ performances, that make or break a show, and I’m glad to say that everything here makes it.

Derek McLane’s scenic design is functionally simple and, as Brown requested, allows us to see the six-piece band the whole time. Emily Rebholz’s costumes help us place the characters at the appropriate times (wait until you see Wolfe in the wedding dress; a shiksa goddess, indeed!), while Jeff Croiter lights the production so well his design is almost a third character. It all comes together under Brown’s vision for this personal show.

The other thing about listening to a recording over and over and over again is that you are able to memorize the exact intonations of the singers and musicians, and that means, inevitably, when you hear the songs performed live they’ll sound different. But as I learned when a new cast came into the Hair revival a few years ago, different doesn’t mean bad, it just means different. Yet in this case, I’m almost tempted to say that different means better.

Not to take anything away from what Scott and Butz did 11 years ago, but Wolfe and Kantor make these songs their own and shed new light on songs and characters I thought I knew.

For example, I didn’t know that Cathy was so funny until the talented and versatile Wolfe (The Mystery of Edwin Drood) did a bang up job on “A Summer in Ohio.” (And wait until you watch her in "I Can Do Better Than That." What an anthem!) And I never heard Jamie’s struggle to make things work until Kantor (the final Broadway company of Rent) brought humanity and soul to “If I Didn’t Believe in You.” These two can not only sing the score but expertly go on their respective character’s journeys, helping us feel everything that happens to Cathy and Jamie. Wolfe and Kantor are a dream pairing (even if, because of the structure and staging they are hardly on stage together), finding nuance, spirit and raw, honest emotions (and expressing new character choices) in this hopeless pair.

This is a stellar, dare I say flawless production of one of the most beloved (by musical theatre acolytes) modern musicals, and I guarantee theatergoers will be talking about it for years to come.