Something’s just not catching with me. I like the spirit behind Once; I like the passion for music, the belief in the transformative power of music and love; I like the not-so-subtle implication that music is life and sustenance. This is a musical that’s all about music; I should be obsessed with this. But I’m just not that into it.

Based on the eponymous film from the early aughts, Once tells the story of Guy (Steve Kazee) and Girl (Cristin Milioti). (From what I can remember of the film—which I didn’t particularly like—the stage adaptation hews very close to the film. John Carney wrote and directed the film; for the stage, Enda Walsh (Hunger) wrote the book and John Tiffany directed.) Girl (a Czech) meets Guy (a native Dubliner) on the streets of Dublin; Guy is playing guitar, singing an original tune, “Leave.” Girl is enchanted. When they find themselves in a music shop, Girl discovers lyrics Guy has written and convinces him to play the song with her (she plays piano) right then and there. They sing “Falling Slowly,” the song that won the film’s stars and composers Glen Hansard and Marketa Irglova an Oscar, and a connection is made. Girl eventually convinces Guy to head into a recording studio with her and other musicians to cut a record and then take it - and his dreams - to New York. This sounds right up my alley, doesn’t it? But, alas, I couldn’t connect to it. It’s not that Once is bad, it’s just...
I don’t love the music. They make the argument that music is life, but their music/lives are depressing—slow and repetitive, tired and almost dirge-like. Many songs are lyrically interesting. I might respond to them if I read them as poems. But the actual music lacks vibrancy—and all the songs sound the same. I can take a song that’s slow and slogging, but not an entire score (which is not new for the musical; most of, if not all, the songs were written for and appear in the movie). There are glimmers of greatness in Hansard and Irglova’s score: The a cappella version of “Gold” shows off the great voices in the cast. The harmonies were exquisite. And “When Your Mind’s Made Up,” the song Guy, Girl and the ensemble sing in the studio (with a full drum kit), actually had some blood—some life—in it. But everything else was too melancholy for my taste.
Perhaps trying to counteract the melancholia of the score, playwright Walsh and director Tiffany try to inject some humor into the show. Everyone around me thought these moments and lines were funny, but the jokes just didn’t land for me. 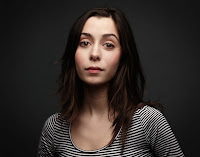 Maybe it was because the “comedian” of the show was Girl, and I didn’t like her. I found her to be kind of annoying and grating. (I don’t remember feeling this way about Girl in the movie.) Instead of being a strong and spirited woman, which is what I think Walsh, Tiffany and Milioti were going for, she came off as bossy and impulsive. Kazee is appealing and talented; he’s a good looking guy playing an acoustic guitar—what’s not to like? Still, I was not intrigued by the character, Guy. And to top it all off, I didn’t sense any chemistry between Guy and Girl, making the love-that-can-never-be story completely un-engaging.
One of the highlights of the show, however, was the dancing. The choreography - or movement, as it’s billed - is by Steven Hoggett (American Idiot), and is really expressive. Sometimes stomping, sometimes subtle, it’s thoroughly effective.
The best part of the show, though, was the pre-show on-stage jam session. The entire cast plays all the music throughout the show—they are their orchestra—and so the pre-show saw them (except for Kazee and Milioti) gathering and warming up in the “pub.” It’s always fun to watch musicians revel in each other, and these guys and gals are all extremely talented. Unfortunately, everything went downhill from there. This overture was nearly the only part of the show that didn’t feel flat and uninspired.
Fans of the film and/or those who go for this kind of music may love Once. It’s certainly been well-received by critics and audiences. To be sure, I appreciate and recognize the craft and the talent. But this musical about music lives or dies by the score, and I just couldn’t take it. Once was more than enough.
American Idiot Broadway musical Once