Hold On To Me Darling 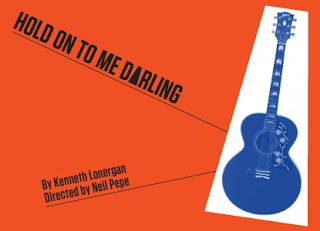 "If I feel it, someone's gonna know it." That's Strings McCrane in a nutshell. McCrane is the country music star and matinee idol at the center of Kenneth Lonergan's latest work, Hold On To Me Darling. The title is the name of one of Strings' songs, and it's also what Strings is searching for.

We first meet Strings (Timothy Olyphant) in a Kansas City hotel room. He's in KC to shoot a movie (which has already gone over due to Strings' "process"), but production has stopped so Strings can mourn the loss of his mother. Without her as his constant, he doesn't know where home is anymore.

Strings has people around him, to be sure. He has, for example, his assistant, Jimmy (Keith Nobbs), who is at his beck and call. Jimmy describes himself as Strings' closest friend, but this doesn't do the trick. Strings is still longing for a connection.

Playwright Lonergan (This Is Our Youth, You Can Count On Me) takes his time developing Strings' character, showing us Strings' impulsive ways. We see this play out in the way he quickly forms an attachment to Nancy (Jenn Lyon), the masseuse who works at the KC hotel. We also see this in the way Strings latches on to Essie (Adelaide Clemens), a second cousin, twice removed (or something). As Strings looks for a home, he idealizes the simplicity of regular work. He looks at his brother, Duke (a strong C.J. Wilson), and thinks, "Maybe that's the answer," and hastily makes a life-altering decision.

Of course, making any sort of rash decision in the wake of tragedy is ill-advised. Yet Strings must find someone to hold on to. While there's plenty of humor along the way, Lonnergan and director Neil Pepe (Hands on a Hardbody) mine the emotional turmoil, building to an ending (featuring a great Jonathan Hogan) that is not only sincere and sensitive but one that feels earned.

Along the way, I appreciated the great writing (something I expected from the playwright). Lonergan wrote Hold On To Me Darling in a twangy vernacular, a sort of regional dialect that makes all these people real characters and not caricatures. And I loved Timothy Olyphant, a stage veteran better known for his work in film and television. (I "met" him in since Scream 2 and Go, and adored him in The Broken Heart Club, but you might know him from Deadwood, Justified, or the recent This Is Where I Leave You.) His laid-back physicality belies an intensity and focus that you can't fake on stage, which is a good thing since he's on stage for all but part of one scene. Olyphant gives an engaged and engaging performance in this great, original American play.
Adelaide Clemens Atlantic Theater Company C.J. Wilson Jenn Lyon Jonathan Hogan Keith Nobbs Kenneth Lonergan Neil Pepe off-Broadway play Timothy Olyphant