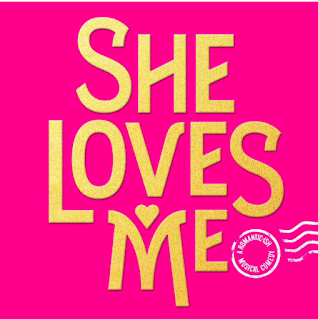 Ah, She Loves Me. It's a story we all know, thanks, mostly, to the movie You've Got Mail, which is based on the same source material as the musical. (That would be the Miklos Laszlo play Parfumerie and the ensuing film adaptation, The Shop Around the Corner.) That familiarity doesn't mean it's not worth retelling. It's a lovely story, quaint, old-fashioned, and sincere, the kind of story we don't see these days, which makes this glorious revival such a welcomed treat. 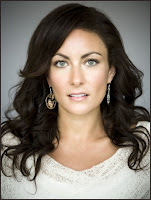 She Loves Me comes from songwriting duo Jerry Bock (music) and Sheldon Harnick (lyrics), who brought us Fiddler on the Roof, and book writer Joe Masteroff, who wrote the libretto for the Kander and Ebb classic, Cabaret. (What a winning trio; Bock and Harnick's score is a feast for your ears, and Masteroff's book is substantive and feels fresh.) It takes place in Maraczek's parfumerie in Budapest, circa 1934. (The locale is rather inconsequential; no one puts on a Hungarian accent (thank Thespis); Laszlo's Parfumerie takes place the capital city, so She Loves Me does, too.)

Georg (Zachary Levi) is a star clerk, and he's been cultivating a relationship with an anonymous woman via written correspondence. (Remember letters?) Soon, Amalia (Laura Benanti) walks into his shop and applies for a job. Georg and Amalia don't hit it off so, of course, Georg's "Dear Friend" turns out to be Amalia, but Georg won't find that out for a little while, and Amalia stays in the dark even longer. 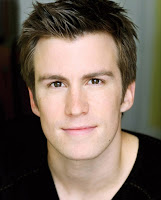 Meanwhile, fellow clerks and commitment-phobes Ilona (Jane Krakowski) and Steven (Gavin Creel) have a light-bulb relationship, and their continual flirtation and drama is the source of much humor. Tony winner Krakowski (Nine, 30 Rock), by the way, is energetic and impressively flexible for someone a little long in the tooth for the role, and Tony nominee Creel (Hair) is so delicious as the suave (philandering) rogue. I'm thrilled to see and hear him back on stage.

Of course, the central relationship is between Georg and Amalia. I delighted in their every exchange, each one reminiscent of the great tete-a-tetes between Spencer Tracy and Katherine Hepburn in the golden age of film. (See Adam's Rib.) Zachary Levi surpasses the bar he set for himself when he made his Broadway debut in First Date. The appealing leading man has a wonderful voice, great comedic chops, and he's game for just about any sort of antic you throw his way. (Wait for his act-two solo, "She Loves Me.") He matches well with Tony winner Laura Benanti (Gypsy, Women on the Verge of a Nervous Breakdown), who is returning to Broadway for the first time in five years to play the plucky Amalia. Benanti has a lovely and sweet soprano, and is just as game as Levi when going for laughs. She'll also knock your socks off with the memorable "Vanilla Ice Cream." (Seriously—this score!)

They don't make musicals like She Loves Me anymore. Of course, they didn't make musicals like She Loves Me when it was written in the 60s. At that time, big, splashy musicals with rows of chorus girls was the thing. She Loves Me is traditional in its book musical structure, but a large, dance-happy ensemble is no where to be found. (There is an ensemble, though a small one. They are terrific in their brief appearances, and they are expertly choreographed by Warren Carlyle (On the Twentieth Century).)

Instead, She Loves Me, with its overture and entr'acte, gorgeous orchestrations (new ones by Paul Gemignani), and sincerely hopeful tone is an intimate musical. And this production, directed by Scott Ellis (You Can't Take It With You, On the Twentieth Century), who directed the celebrated 1993 revival of the show, features a beautiful, lush scenic design by David Rockwell, with dapper threads by Jeff Mahshie to go along with it. It's a great production of a great show. I love it!
Broadway gavin creel Jane Krakowski Jerry Bock Joe Masteroff Laura Benanti musical revival Roundabout Scott Ellis She Loves Me Sheldon Harnick Zachary Levi