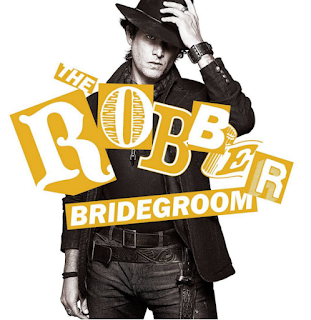 Jamie Lockhart steals with style, and, boy, does he make it look good. The titular character, played with zeal by the hunky Tony nominee Steven Pasquale, says he's a two-faced man, he's both the Bandit of the Woods and Jamie Lockhart. After saving townsman Clement Musgrove (Lance Roberts) from being robbed at the hand of Little Harp (Andrew Durand), Jamie is invited to dine with Clement and his family, which includes his second wife, Salome (Leslie Kritzer), and his daughter, Rosamund (Ahna O'Reilly).

I suppose the plot is important—there's some stealing and scheming and loving going on down in Mississippi—but in my view, the plot is just the excuse for Tony-nominated director Alex Timbers to gather some merry players and put on a show.

For this Alfred Uhry–Robert Waldman musical, Timbers (Here Lies Love, Rocky) returns to the scrappy, ensemble-reliant style he so expertly used with Peter and the Starcatcher and Bloody Bloody Andrew Jackson. (He even re-enlists some of his collaborators from those shows: actors Nadia Quinn and the hilarious Greg Hildreth; Tony-winning scenic designer Donyale Werle; costume designer Emily Rebholz; and music director Justin Levine.) In doing so, he gets to the core of what theatre is about—a group of people working in concert to tell a story. It's full of glee and giddiness, and you'll have a blast for the too-brief 90 minutes you're in Timbers's care.

Though it is an ensemble, I must single out funny lady Leslie Kritzer. The versatile actress, who was most recently the best part of Gigantic, easily steals the show (which is hard to do when you have the option of looking at and listening to Steven Pasquale (The Bridges of Madison County); scroll back up and look at him in the show art). Her comedic chops will remind you of Carol Burnett, and she's so game for whatever Timbers throws her way, it's a wonder it's taken the two of them this long to collaborate.

This is the first major revival of The Robber Bridegroom since it debuted in the 70s, and because it's a Roundabout show, it's only a limited run. So put on your cowboy boots, secure your valuables, and make your way to this delightful romp of a musical while you can.
Ahna O'Reilly Alex Timbers Alfred Uhry Greg Hildreth Leslie Kritzer musical revival Robert Waldman Roundabout Steven Pasquale The Robbert Bridegroom