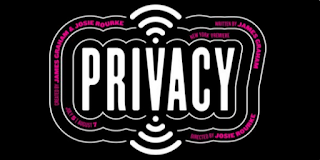 There's a lot of publicity surrounding the Public's production of Privacy, a modern morality tale created by James Graham and Josie Rourke. (This is a co-production with London's Donmar Warehouse.) Much attention has been paid to Privacy's leading man, Daniel Radcliffe, someone who's grown up in the public eye; to the fact that audience members will be encouraged to use their phones during the performance; and to the taped appearance by Edward Snowden.

Publicity is great, but the play's the thing, and this play, written by Graham and directed by Rourke, is more like a theatricalized TED talk than a play. Plot or character motivation is used as a device to explore and demonstrate how little privacy we have. (One thing that connects this to theatre history is social media being a stand in, of sorts, for the Greek chorus, or the townspeople who are constantly on stage in Our Town—someone is always watching and commenting.)

Radcliffe (The Cripple of Inishmaan) plays a writer who, after breaking up with a lover who accused him of not being open, goes to a therapist to try to open up. A discussion about privacy ensues, and soon, under the auspices of research for a play, Radcliffe's writer hops a plane from London to New York, and conjures up and conducts interviews with privacy experts, technology whizzes, algorithm adherents, government officials, and a host of other such personalities.

Throughout, several of these interviewees address the audience, instructing them to do something on their smart phones. Each exercise demonstrates that practically nothing is private. Big Brother is always watching, even when you think things are turned off. We now are data points, and almost everything we do—even some of the seemingly analog things—are metadata. So is there anything such as privacy anymore?

For example, I was unexpectedly part of the show. I knew, before arriving at the theatre, that we'd be encouraged to leave our phones on, and that we might be asked to use them during the show. I didn't know that my participation would start before the show did. Unbeknownst to me, I was filmed walking into the theatre and giving the usher my ticket. (I hadn't noticed any signs on the way in saying I was being filmed, or that by entering the theatre, I agreed to be filmed.) That footage was shown during the show. My face was somewhat obscured by digital overlays, but it made me feel uncomfortable, like it was an invasion of privacy.

And that's the point. Here I was in a place I thought was safe, in a place I thought I didn't have to worry about my personal or private moments being made public. But my privacy was invaded. Now, most of the revelations in Privacy weren't revelations for me. I am an educated woman, one who is up on current events, and I've read the articles and seen the interviews. I know Big Brother is always watching. Yet I thought there were still some safe spaces. After seeing myself literally projected on stage, I couldn't help but think about the 14th amendment, and if, in this post-Snowden era, we can ever have a reasonable expectation of privacy.
Note: kudos to the ensemble, who (except for Radcliffe) play dozens of characters. In alphabetical order, the company includes: De'adre Aziza (Women on the Verge of a Nervous Breakdown), Raffi Barsoumian, Michael Countryman, Rachel Dratch (SNL, Ripcord), Radcliffe, and Reg Rogers (You Can't Take It With You).