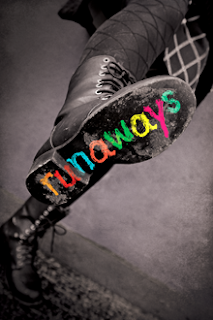 Some things were revolutionary when they were created, and, because of that, there's a special place in the pantheon for them. That doesn't necessarily mean they're great things, that they hold up. Consider Citizen Kane. It was a declared a marvel in its time, pioneering in its cinematography, the storytelling, the material... But have you watched it recently? It doesn't hold up. Outside of appreciating its place in film history, there's not much to enjoy about it now. (A widely-revered classic that does hold up? Casablanca.)

This was the feeling I had walking out of the Encores! Off-Center production of Runaways, the Elizabeth Swados musical that tells runaway children's stories. When the piece was created and mounted in the late 70s (first at the Public, then on Broadway), it was considered daring and dangerous, punk and important, urgent and vital. Not exactly a musical (there's no plot, linear or otherwise), Runaways is more a themed revue, mixing songs, poems, speeches, and dance in order to give voice to the young people who have run away from home, and are out on the streets trying to not die. (I'm careful in not saying they are trying to live.)

I think you'd have to be a monster to lack compassion for the children represented on stage. Ranging in age from 12 to 19, these children have left home (if you can call what they left a home). Some have become junkies. Some, at the mature age of 13, have taken to prostitution as a way of life. Everyone is left to fend for themselves, and to grow up long before it's time.

And, indeed, I'm not a monster so I have compassion for these children. I want to hug them all, and take care of them. I think it is important to have their stories told. I just don't agree with the madding crowd that this production is urgent and vital and impressive. I think most of the people carrying on about how amazing Runaways is are really saying that the original production was groundbreaking, and that they like being able to revisit it.

Without taking anything away from the work the young actors (including Lazarus's Sophia Anne Caruso) are doing, this didn't strike me as revelatory. I get the piece, and I understand its place in theatrical history. I'm just not going wild over it. To be sure, there are plenty of moving, poignant moments in it, and there are some child actors on that stage that I know I will see on other stages. But when the curtain came down and I left the theatre, Runaways didn't stay with me.

With one exception: the closing song's refrain, "Let me be a kid." If there's something to draw from this (other than for parents and guardians to love their children and wards), it's that kids should be allowed to just be kids. They don't need to wear make up. They don't need to be responsible for so much. They don't need to be over-scheduled, making it so they have no time to just be. Kids should be free to be (you and me); they should have downtime, time to be bored and use their imagination. Time to process whatever is or isn't happening to them, and develop coping mechanisms. Time to be kids. If you run away from this show with anything, run away with that message.
Elizabeth Swados Encores musical off-Broadway Off-Center Runaways Sophia Anne Caruso