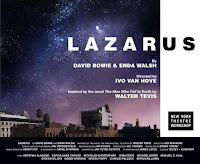 Lazarus in London
A London production of Lazarus will be mounted this fall. Featuring music from the late, great David Bowie's catalog (and a few new tunes) and a book by Enda Walsh, Lazarus is inspired by and is a continuation of The Man Who Fell to Earth. Michael C. Hall, Michael Esper, and Sophia Anne Caruso, who starred in the off-Broadway run last year, will reprise their roles across the pond. Lazarus will begin previews at the Kings Cross Theatre on October 25. Opening night is set for November 8, and the limited engagement is scheduled to conclude January 22, 2017. Broadway.com has more.