The Dream of the Burning Boy 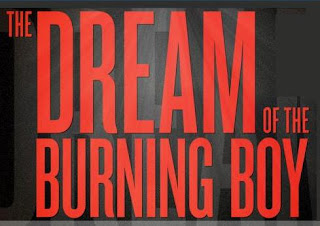 “How did all that happen in an hour and a half?” an older gentleman asked his wife as we all exited the theatre. Indeed, in just about 90 minutes, The Dream of the Burning Boy explores loss; victim-hood; grief; rebirth; and a host of other emotions in a thoroughly moving and intelligent way.

Written by David West Read and produced by Roundabout Underground (a lab, essentially, in which emerging playwrights have their work fully produced in Roundabout’s cozy black box theatre), this gem of a play affects you and stays with you long after the curtain call. At rise, Larry, an English teacher at a small suburban high school, is talking with a student, Dane, about his recent paper, “Losing My Virgility,” written in response to the class’s study of Dante’s Inferno. After they finish speaking, Dane walks out of the classroom and (off-stage) suffers from a fatal aneurysm. And thus, for the rest of the play Larry, Dane’s sister Rachel, his girlfriend Chelsea, his best friend Kyle, his mother Andrea and the school’s guidance counselor Steve all are left to deal with the aftermath, including some dreams that would be right up Freud’s alley. (The title, in fact, is taken from a reference in one of Freud’s dream books.)

Perhaps the most remarkable accomplishment of this play is its evenhandedness. All the characters were well written and fully developed. The character Chelsea (Jessica Rothernberg) is one that, on spec, I’m inclined to dislike. She’s a thin, pretty, popular girl, perhaps affluent, and always dressed impossibly well. (Great costume design by Jessica Wegener Shay; also, Ben Stanton’s lighting design helped create or enhance the mood for each scene.) Usually, a character like that makes me think back to high school (or sometimes middle school) and all the “mean girls” that made my school experience wretched (to be dramatic about it). Rachel (Alexandra Socha), Dane’s (Josh Caras) sister, reminded me more of Daria, a little bit more like I was in high school – more mature and possibly smarter than some of her peers, and just “over” high school. But the interaction of Chelsea and Rachel actually made me feel sympathy for not just Rachel but Chelsea, too. Chelsea, in fact, seemed to actually be dealing with Dane’s death, rather than hiding in over sized sweatshirts. Playwright Read crafted such round characters that you really felt for each of them.

Much of that is also due to the cast. As the young guidance counselor Steve, Matt Dellapina brought just the right amount of eagerness and earnestness to the role. Steve is a little green and his first reaction to dealing with Dane’s sudden death is to create posters with inspirational sayings, like, “Everything will be all right.” Not very inspiring, if you ask me, but through Dellapina’s performance, you saw that Steve, who used to be a student at the same high school, is trying to make everyone feel better. His methods may be questionable (like when he arranges a surprise meeting between Larry, the teacher, and Dane’s grieving mother, Andrea (Kristie Dale Sanders, great in her one scene)) but his heart is in the right place, as they say.

Particularly good, though not surprisingly so, was Reed Birney in the difficult role of Larry. (Read Charles Isherwood’s New York Times review for more Reed Birney praise.) Larry is not used to connecting with people. Somewhere in his mid- to late-forties, Larry has never been married; he had a cat, Homer, but the cat died several years ago. He brushes off Steve’s entreaties to talk about his feelings and expresses frustration at not having students to teach. (Most of the students take advantage of “grieve leave,” during which students can excusably skip class, ostensibly so they can work out their grief.) In dealing with Steve, Rachel and everyone else, Birney’s skill as an actor is on full display; he is most intimidating and domineering when (or perhaps because) he doesn’t raise his voice. The soft, slow delivery packs a hard and fast punch.

This play is really about making connections to people and in this wonderful production, directed by Evan Cabnet, Read’s words and the actors’ performances definitely connect with the audience. Whether or not you’ve gone through something like this before (it’s tragic, so hopefully you haven’t), you’ll be able to connect to the raw nerves in front of you. The Dream of the Burning Boy is incredibly moving and thoughtful and so many other things, and all in just 90 minutes.

Visit roundaboutunderground.com for more information (including production stills) and to purchase tickets to this play, which is currently running (after an extension) through May 15.