The People in the Picture 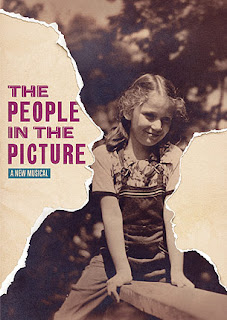 Have you ever wondered what Jewish guilt would look and sound like on a stage? Well, look no further than The People in the Picture, the new musical that just opened at Roundabout Theatre’s Studio 54. Written by Iris Rainer Dart (book and lyrics) and Mike Stoller & Artie Butler (music), the show concerns a Yiddish theatre troupe in the Warsaw Ghetto, circa 1935-1946, as recounted to one of its player’s granddaughter in New York in 1977. There’s a lot to mine there and the subject matter could be interesting, but unfortunately this production doesn’t live up to what could be.

As directed by Leonard Foglia, The People in the Picture is too slow, a little too long and un-engaging. I attended the musical with three friends and all of us had a similar reaction. We were unmoved by what could be moving subject matter, and I found myself becoming more and more restless as the show progressed.

It’s not for a lack of talent. Donna Murphy stars as Bubbie/Raisel, Raisel being the theatre troupe star from 1935-1946, and Bubbie being Raisel as a grandmother in 1977. She transitions fairly seamlessly between the two ages, affecting an “old world” accent when she speaks to Americans in 1977, and when she engages in schticky routines as one of the players, it’s mildly entertaining. But that just didn’t cut it. Plus, Murphy is a great dancer and we didn’t get to see any of it. On the few occasions she danced, her legs were covered by a long dress.

Speaking of the choreography, Andy Blankenbuehler is at it again and for my taste, that’s not a good thing. Blankenbuehler won a Tony for his choreography for In the Heights; I wasn’t impressed with it there and I was underwhelmed here. First of all, it looked pretty much like every other bit of choreography I’ve seen from him (in addition to In the Heights, I’ve also seen his choreography in 9to5 and The Apple Tree). It is angular and staccato, with no real emotion behind it. Which brings me to my second beef: it looked like he was trying to emulate Jerome Robbins’s Fiddler choreography but there was no flair, no neshuma. It was actually a little too clean and sharp for the people dancing it. I suppose it’s better to have clean and sharp choreography than something sloppy, but this was slick to the point of soulless.

One more kvetch, if you’ll allow: There’s a point in the show during which Bubbie’s granddaughter, Jenny (Rachel Resheff), is talking to her mother, Red (Nicole Parker), about Yiddish words. Jenny says her teacher mentioned a few words that aren’t Yiddish but sound like they are, including the word farfetched. I hate to complain, dear readers, and I don’t like to grouse, but Aaron Sorkin already beat The People in the Picture’s writers to that joke. In the “The Midterms” episode of The West Wing’s second season, Donna says to Toby, “You know what word should be Yiddish but isn’t? Spatula. Also farfetched.” Now, in The People in the Picture the other word isn’t spatula (it’s bachelor, but said with a New York accent, leaving off the “r”), but still… I’ve heard this before.

And that was another problem: As this is a new, original musical, I didn’t come in to it knowing all the songs. Without prior knowledge of the score, I found it difficult to hear and decipher all the words being sung. This led to some missed jokes; although, the jokes I did hear I saw coming from a mile away.

Maybe my parents’ generation and those before, who are closer to the kind of people depicted in The People in the Picture, will be engrossed more than I was. But for me, if I want to watch a musical about Jewish life in times gone by, Fiddler on the Roof will suffice. This doesn’t add anything new to the discussion and it’s not nearly entertaining enough to join the ranks just because.