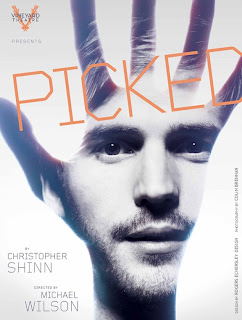 They say you should be careful what you wish for, but unfortunately Kevin, our protagonist in Christopher Shinn’s Picked, doesn’t heed that warning. The struggling actor, played by Michael Stahl-David, is looking for his “big break.” He gets it from filmmaker John (Mark Blum), who picks Kevin to star in his latest science-fiction movie. Kevin devotes years of his life to making the film only to find that he is unemployable after its release. All the while, he struggles in his relationship with his girlfriend, Jen (Liz Stauber); is intimidated by, then befriended by and finally rebuffed by a fellow actor, Nick (Tom Lipinski); and finds it difficult to connect with casting directors, like the one played by former New York City First Lady Donna Hanover.

While the perils of getting what you wished for and the pros and cons of being plucked from the unknown and catapulted into a blockbuster movie are interesting and, as directed by Michael Wilson and performed by this Vineyard Theatre production’s cast, engaging, what really struck me was the pre-production process of the fictional film.

John approaches Kevin and tells him he wants to delve into Kevin’s mind; he wants to mine Kevin’s emotions, whether palpable or sub-terra, and use what he finds to write a film set in space and which explores the distinction, or possible lack thereof, between good and evil.

You see, John has developed or been connected to technology that can essentially see inside your brain. So, the plan is for John to interrogate interview Kevin and have some super computer record his neurological impulses. This would allow John to become aware of hidden emotions that the otherwise open Kevin doesn’t convey outright. John feels that having such insight can help him develop a stronger script, as he can use those subconscious feelings to figure out his characters’ motives. (The whole thing sounds very Avatar-like; in fact, playwright Shinn recently told the Wall Street Journal that John is Shinn “imagining James Cameron after ‘Avatar.’ How would he try to go deeper?”)

It’s an interesting pre-production process, but it left me entirely uncomfortable with the exploitation of Kevin. Sure, he was fully aware of what was happening – it’s not like John slipped him a roofie and hooked him up to this machine – but Kevin wasn’t privy to the interpretation of his synapses the way John was. Kevin didn’t have the insight into what was happening inside of him. John specifically forbade Kevin from being a part of the analysis. Instead, he was asked a series of provocative questions and made to explore some deeper sides of himself and then there was no follow up. No way to help him “recover” from that. (Kevin’s reaction, we learn in act two, actually inspires John to write another film.)

Perhaps I sympathized with Kevin so much because of the refreshing vulnerability Michael Stahl-David brought to the character. Stahl-David (who looks kind of like a Midwestern James Franco) effectively conveyed Kevin’s professional and personal struggles. He was rather unassuming in the role, which seemed to work. His Kevin was patient, empathetic and sincere, qualities you don’t always expect to find in actors (sorry actors!) but were clearly intended by playwright Shinn.

The production wasn’t without its flaws. I found the chemistry to be lacking between Kevin and Jen, and sometimes their scenes played as too rehearsed, too quick. But overall, I found this to be an interesting look at an actor preparing, and also a rather open treatise on the profound impact technology can have on human endeavors.

For more information and to purchase tickets to Picked, visit vineyardtheatre.org.