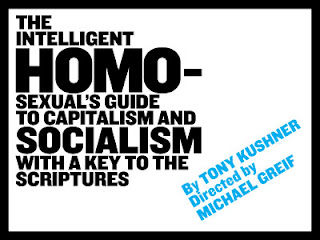 It seems sort of appropriate that I saw Tony Kushner’s The Intelligent Homosexual’s Guide to Capitalism and Socialism with a Key to the Scriptures during Passover, as the whole play is about finding freedom. Freedom from some prisoner, whether that prisoner is time, work, family or all of the above, the catalyst of the action is a father’s quest for freedom.

In the Marcantonio brownstone on Clinton Street, Carroll Gardens, Brooklyn, Gus (Michael Cristofer) has gathered his family, sister Clio (Brenda Wehle) and children Pill (Stephen Spinella) Empty (Linda Emond) and V (Steven Pasquale), to tell them he is going to kill himself; he’s an old man, a Local 1814 International Longshore and Warehouse Union retiree, and he thinks he has Alzheimer’s. (His children aren’t convinced.) He has told his sister he will abide by whatever consensus she and the children come to. Complicating matters and adding to the emotional turmoil are Pill’s partner, Paul (K. Todd Freeman) and lover, Eli (Michael Esper); Empty’s pregnant partner, Maeve (Danielle Skraastad) and ex-husband, Adam (Matt Servitto); V’s wife, Sooze (Hettienne Park); and Gus’s lady friend, Shelle (Molly Price). Sounds light and easy, right?

Of course it’s not, but in the vein of O'Neill and Miller before him, Kushner has crafted an interesting, thorough and ultimately thought-provoking new play, enjoying its New York premiere at the Public Theater, in association with the Signature Theatre. Directed by Michael Greif (he of Rent and Next to Normal fame, among many other credits), iHo (as folks have taken to calling it) takes us through three days of struggle. Everyone must come to terms with their past; the children try to make peace with their father; and lovers new and old must navigate the rocky relationship waters, all while looking for some kind of freedom and value in their life.

The characters explore (and leave us thinking about) what makes one free. Is it about control? If so, control over what? Our time? Our selves? Are our time and our selves one in the same? What’s our value? What’s our time and labor worth? Does killing yourself, as Gus plans to do, make you brave? Gus believes that he will find freedom in death, in refusing to continue with the suffering of life. He says something to the effect of living simply to not die is a much more painful death than leaving on your own terms. Is he right? If you’ve lived your life and are now just waiting around for the end, is it freeing - and maybe even noble - to leave life as you wish? Gus thinks it is. He ends the play by saying, “I’m thinking.”

And all that thinking got me thinking about too much thinking. Most of the characters in the play are academics and are, in my opinion, overly analytical. I’ll admit that I can over analyze things (don’t we all?) but the difference I perceive is that Gus, Pill, Empty, et al., think things through to the point of being desensitized and do not consider anything emotional or illogical. If an action, belief or point of view cannot be justified by scholarship, and is backed up by emotion alone, it doesn’t carry weight for most of the Marcantonio family.

Indeed, when Pill actually acts on emotion and engages in an affair with Eli, he struggles to reconcile what he feels for Eli and what he knows he should do with Paul, his partner of 26 years. There’s a look of terrible longing on actor Stephen Spinella’s face when his Pill resigns himself to follow his analysis to a life of weakness rather than act on his emotions.

Bringing these complicated characters to life is a wholly great cast (with the slight exception of Hettienne Park as Sooze; she was too shrill for my taste), led by the esteemed Michael Cristofer as the Marcantonio patriarch. Cristofer ambled around the stage, a man possessed by an idea and doing his damnedest to convince everyone around him into going along. He goes toe to toe with each of his children, and Stephen Spinella, Linda Emond and Steven Pasquale more than hold their own.

Pasquale was particularly impressive as the child who “couldn’t go to where everyone else is.” V is the youngest of the three Marcantonio children and, as the straight, macho contractor, he’s the odd man out in an overtly academic family. Pasquale brought strength of character (rather than mere brute) to the role, imbuing V with a thoughtfulness and relatable nature.

Spinella’s Pill was a pill, but I liked the way he seemed to underplay the role. Not that he didn’t come out in full force when necessary (he certainly brought his A-game for some prime shouting matches) but in Spinella’s hands, Pill was layered and vulnerable, not some bombastic ideologue (like his father). 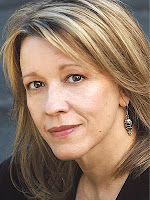 And Emond’s performance as Empty was most moving. Empty is the Marcantonio child most like Gus and that makes Gus’s decision especially hard for her. Emond plays Empty with patience, journeying on until Empty is just about emotionally empty, and even then, she gives just a little bit more.

As the two men in Pill’s life, K. Todd Freeman and Michael Esper are thoroughly convincing as Paul and Eli, presenting Pill with two very 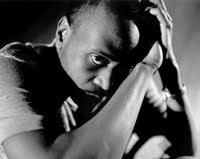 different styles of companionship. Freeman’s Paul fits in to the family in that he is most certainly an academic (he’s an atheist who teaches theology) and so he pontificates on cue and over analyzes like the others. But, having not grown up in the Marcantonio house, he remains at a skeptical distance from the family and tries to remove Pill from the volatile situation, but not without stirring the pot just a little bit. 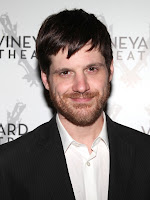 And Esper, who created the role when iHo had its premiere at the Guthrie and was most recently seen on Broadway in American Idiot, was wonderfully sensitive and impassioned as “the other man.” Esper and Spinella had a great chemistry. You could see, immediately, from their interactions that they cared deeply for one another but also that they’re terrified of being open, honest and adult about their relationship.

The Intelligent Homosexual’s Guide to Capitalism and Socialism with a Key to the Scriptures doesn’t necessarily explore anything new (although, despite taking place in 2007, with all the talk of laborers and workers’ rights going on in the play it is certainly timely in 2011) but that’s okay. Michael Greif has directed this production with care. (I like the way some scenes occurred simultaneously, with characters shouting over each other on different parts of Mark Wendland’s set.) But, most importantly, Tony Kushner’s incredible writing is both funny and affecting; its themes will make you think for days after seeing the nearly four-hour treatise on freedom.

For more information about iHo and to purchase tickets, visit the Public Theater's website.