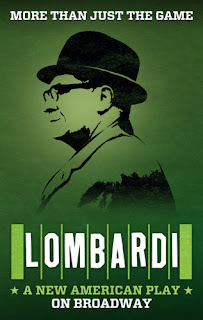 “God, family and the Green Bay Packers,” but not in that order. That, says Marie Lombardi, sums up her husband, legendary football coach (and the namesake of the Super Bowl trophy) Vince Lombardi. A week in the life of this winning coach is the subject of the Broadway play Lombardi, which holds the distinction of being the only show to have opened in fall 2010 and still be running today.

Coach Lombardi’s story, written by Eric Simonson and directed by Thomas Kail, is told through the lens of a reporter, Michael McCormick (Keith Nobbs), who has been granted the privilege of spending a week with the Lombardis (Dan Lauria and Judith Light as Vince and Marie), at home and on the field. On the field he meets Packers players Dave Robinson (Robert Christopher Riley), Paul Hornung (Bill Dawes) and Jim Taylor (Chris Sullivan). I love football, but going in to this I didn’t know much about Coach Lombardi so I found this ninety-minute look into his life and his coaching (really, one in the same) to be interesting and fairly engaging.

The action dragged a bit here and there, but there were two moments (or one set of moments and one scene, to be exact) that I particularly enjoyed.

Throughout the play, player Taylor makes mention of a players association, and he talks to the team’s representative, Robinson, about some of his concerns. Late in the play, Taylor comes to blows with Coach Lombardi. Taylor complains about the new kids coming in and, in their rookie season, making much more than veteran players, like himself. He complains about the injuries he sustains during the season and the scant resources provided to help him recover. Does any of that sound familiar? This all takes place during the Packers’ 1965 season, but the same concerns still haunt and divide the NFLPA and the team owners. (Visit nfl.com to stay up to date on the lock out, the appeal and draft day, baby!)

The other piece I liked was the interaction between Marie and Vince. Lauria and Light have such a great, easy chemistry. I felt like I was really watching a married couple; they have their bits; they know which buttons to push and how to get the desired response from the other – their rapport and the look into their relationship was so interesting to watch. Usually, when “football movies” try to add in a love story of some sort, it’s weak and underdeveloped. Not here, which I think adds to the appeal of the play.

You see, Lombardi, with its marquee name in both its subject and its two stars, is an easy choice for tourists and uninitiated theatre goers. But it’s not just that the football fan in your family will like it. The relationship between Vince and Marie (and the relationship between Coach Lombardi and his players) will hook even non-NFL fans. (To wit: My friend who joined me loves baseball but won’t watch a football game. She gave the cast a standing ovation.) True, it’s not a great American drama of yesteryear, but it’s solid and entertaining, and it’s appropriate for almost all ages.

Plus, watching the game footage at the end made me ready for some football. Players, coaches and owners: Please kiss and make up so the season can begin on time and we can watch through exhibition games, 16 regular season games and the playoffs in anticipation of seeing just who will take home the coveted Lombardi trophy!

Visit lombardibroadway.com for more information or to purchase tickets to the play.