The Unavoidable Disappearance of Tom Durnin

The Unavoidable Disappearance of Tom Durnin is good. I liked it. But there is nothing overwhelmingly amazing about it, except for the accurate if clumsy title. The new play by Steven Levenson is having its world premiere run at Roundabout, where Levenson’s The Language of Trees was a hit in its Underground series. For an emerging playwright, there is a lot to praise and much potential. I don’t have anything disparaging to say but I also don’t feel moved to be effusive in my praise.

Tom Durnin focuses on a relevant if oft-overlooked topic. Financial crimes are almost old hat by now (maybe particularly for jaded New York audiences) but what about the indirect victims? Levenson centers his play on those people.

At rise, the titular Tom Durnin (David Morse) pays an unexpected and unwelcome visit his son, James (Christopher Denham), after being released from a “country club” prison, having served time for a white collar crime. Throughout the play, we watch Tom manipulate everyone around him (including his son-in-law and his now ex-wife) while James, though well-intentioned, proves that the apple doesn’t always fall far from the tree.

It is fascinating to look at the lives of a different set of affected parties, after so much attention has been paid to the direct victims of Ponzi schemes and other financial debacles. I think all too often we write off anyone associated with such white collar criminals. What Levenson does nicely is show that criminals have families, too, and a lot of the time they have nothing to do with the criminal activity and really were innocent bystanders.

In doing so, Levenson draws a compelling picture of tricky family dynamics. For instance, though two people might be related, what do they owe each other? And if one of them is a convicted criminal, does what you owe the other change? Levenson doesn’t provide any simple or easy answers (when have family interactions ever been simple or easy?) but does leave us with a hopeful ending. 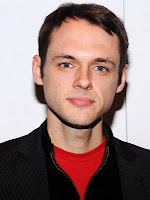 Directed by Scott Ellis (TheMystery of Edwin Drood), Tom Durnin runs along at a nice pace, finding truly funny moments alongside moments of poignancy and utter intensity. I particularly like the natural dialogue and nervous, awkward delivery in the scenes between James and his fledgling love interest, Katie (Sarah Goldberg (TheGreat God Pan)). The cast, which also includes Lisa Emery (Sex Lives of Our Parents) and Richard Sommer, all does great work, especially the magnetic, chameleon-like Denham (Welcome Home, Dean Charbonneau, Argo), who turns in a wonderfully layered and thoughtful performance.
The Unavoidable Disappearance of Tom Durnin continues at Roundabout Theatre. Visit the off-Broadway’s organization’s website for more information and to purchase tickets.
Argo Christopher Denham drama off-Broadway play Roundabout