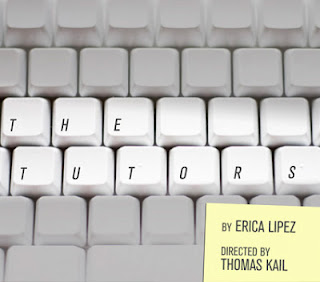 Second Stage Theatre’s uptown season is off to a good start with Erica Lipez’s The Tutors. Directed by Thomas Kail (In the Heights, Lombardi), The Tutors focuses on three roommates, two of whom are tutors and one of whom edits college admission essays, all of whom could use some life lessons of their own.

We first meet Toby (Keith Nobbs) when he is covering for roommate and fellow tutor Joe (Matt Dellapina), tutoring Joe’s "tutee," Milo (Chris Perfetti). Toby likes what he does and tries to adhere to a noble ethical code, both in work and in life. Milo is a high school student, a snotty rich kid who is trying to do anything but learn academics. Back at Toby’s apartment, we meet his other roommate, Heidi (Aubrey Dollar), who gets through her days (which, for that last several weeks, she’s spent exclusively in the apartment) by fantasizing about Kwan (Louis Ozawa Changchien), a former client whom she’s never met. The three roommates (Toby, Joe and Heidi) are also trying to create a friendship-based social networking site, similar to “banned word” (i.e., Mark Zuckerberg’s behemoth).

What’s clear right off the bat is that though Toby, Joe and Heidi are the ones who are supposedly imparting wisdom upon their students/clients, they could use some help, themselves. All of them are stuck in a rut, having gotten used to—at a young age (they’re mid- to late-20s)—being continually disappointed. (At one point, Joe says, "I think we're too young to be so used to not getting what we want.") Having known each other since college, they tend to enable one another, whether it’s because of unrequited love or a lack of purpose, and so they remain stunted. It isn’t until interlopers Kwan and Milo meddle in their lives that the tutors actually learn something.

Lipez has written a realistic play that asks audiences to think about perception and life lessons. What are the stories we tell, what do they mean and what do we learn if we only think about the stories and don’t actually live them? In Kail’s nicely paced production, these provocations and plot points are revealed subtly, and deliver a powerful message without being preachy.

(Though I saw the show in early previews, it’s worth noting how good Betsy Adams’s effective lighting design and Rachel Hauck’s lived-in and purposefully cramped scenic design already were at that point.)

The entire cast does well with the rich material. Milo is the most stereotypical character of the five, but Perfetti (Picnic) finds true beats, particularly toward the end. As Joe, Dellapina (The Dream of the Burning Boy) is confoundingly charming, in the way that, though you know better, you find yourself charmed by the arrogant slacker with too much swagger. Changchien (Warrior Class, Year Zero) is impressive as two versions of Kwan, first as the idealized Kwan of Heidi’s fantasies and then as someone much more interesting and real. Nobbs (The Great God Pan) brings touching sensitivity to Toby, the emotional center of the show. And Dollar (Completeness) is present and natural on stage, making it easy to relate to what Heidi is going through.

The Tutors continues at Second Stage Uptown. Visit 2st.com for more information and to purchase tickets. Watch a sneak peek below.