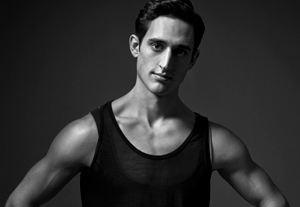 The New York City Ballet spring season is almost over but fortunately I got in one last program, and it was a great one. On Saturday afternoon, I had the pleasure of seeing George Balanchine’s Serenade, Richard Tanner’s Sonatas and Interludes, Justin Peck’s In Creases and my favorite, Jerome Robbins’s NY Export: Opus Jazz. 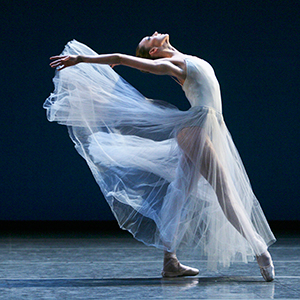 When I first sat down, I was in such a foul mood because the MTA had thrown a hissy fit. But then the lights dimmed. The NYCB orchestra began to swell with Tschaikovsky’s score for Serenade. The curtain rose and the beautiful ballerinas were standing there, their crinoline skirts cascading down. They began to dance and I remembered there is beauty in this world. 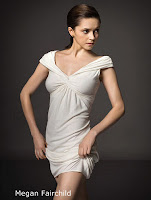 I feel like that mood transition actually helped me “get” Serenade even more this time. (The last time I saw this, I liked it but didn't get into it the way I did on Saturday.) It’s beautiful for the sake of bringing more beauty into the world. What a glorious gift.

Megan Fairchild brought a delightful airiness to her dancing, mixing some of her charm with this more mature and dramatic ballet. Jared Angle and Adrian Danchig-Waring were impressive, able partners, with Angle once again wowing with the height of his jumps. 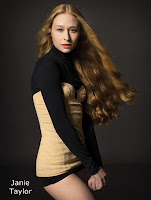 But the ballet belonged to Janie Taylor who, at first, appeared like a light, free spirit. Later in the ballet, she let down her hair and became an angel of sorts—loving, losing and then lighting the way as the men carried her off stage. She is one of those dancers who is not to be missed. 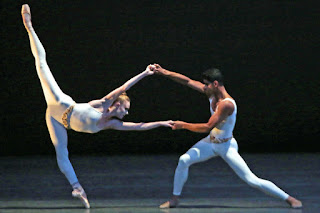 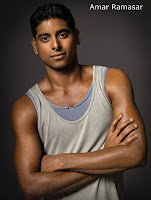 Next up was Richard Tanner’s Sonatas and Interludes, a pas de deux set to a John Cage composition. As the repertory notes state, Cage composed a 20-piece collection of music for “prepared piano” (this ballet uses five of the pieces). The notes further explain:

The term prepared piano refers to a concept developed by Cage around 1938, in which the composer experimented with changing a piano’s sound by inserting bits of wood, paper, screws or other objects between or on the strings at various points to produce a more percussive sound. Instructions, either written or described in diagrams, are given in the front of the score in minute details. 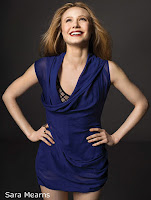 It has a strangely powerful effect. The prepared piano sounds like an entire percussion section, but it’s just one piano and one pianist (Nancy McDill). Tanner clearly connected with this different tone because his ballet seems to be the perfect complement.

The music and accompanying choreography is sometimes jazzy, sometimes almost rumba-like, but always fascinating. There are foreshadows of Christopher Wheeldon’s breakthrough, Polyphonia, which I didn’t mind one bit.

Strong, athletic and wonderfully unusual, Sonatas and Interludes requires a tour de force performance from its dancers, and Amar Ramasar and Sara Mearns (dressed in white uni-tards that showed off each muscle as it was worked) most certainly rose to the occasion. This is one cool ballet. 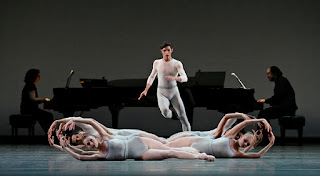 Wow is the best and most succinct way to describe Justin Peck’s In Creases. Using Philip Glass music and collaborating with the Company’s head costumer Marc Happel for the understated costumes, Peck created a crisp, precise ballet that has a unique energy.

Glass’s music, the first and third movements from “Four Movements for Two Pianos,” is played by two on-stage pianists, Elaine Chelton and Cameron Grant. They are placed upstage and, at times, reminded me of Peter Martins’s Hallelujah Junction. What struck me about the set up was that the pianos were positioned in such a way as to make it look like it was one, two-sided piano, rather than two instruments.

There is not a story, per se, but in In Creases, Peck seems to be exploring the creases—the in between moments—of life. What happens in the folds, and how do we get out of them? He has the dancers (a terrific octet featuring Sara Adams, Daniel Applebaum, Robert Fairchild, Emilie Gerrity, Brittany Pollack, Gretchen Smith, Taylor Stanley and Christian Tworzyanski) continually folding and then gradually opening themselves up (Mark Stanley’s lights emphasize these movements). 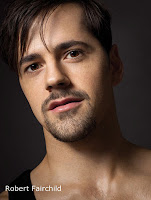 It’s an exercise in strength and discipline, most fantastically shown off in Fairchild’s solos. I always thrill over his performances because of the flair he brings to his roles. But this role allows him to remind us that he’s a dancer first and a performer second. He shows off his virtuosic dance technique without (appropriately, for this ballet) his trademark charm. He’s truly a spectacular dancer, and I can’t stop thinking about the way he folded and unfolded, every move superbly precise, sharp and powerful.

Though In Creases is rising choreographer Peck’s third ballet to premiere at the State Theatre (after Year of the Rabbit and Paz de La Jolla), it’s actually the first piece he choreographed for the Company. (In Creases had its NYCB premiere last summer at the Saratoga Performing Arts Center, the Company’s summer home.) It’s no wonder that after seeing In Creases at SPAC last summer, Ballet Master in Chief Peter Martins tapped Peck for two ballets for this 2012-2013 season (one of which filled a slot that opened up after Martins had to delay his own ballet), plus another world premiere for the 2013-2014 season. In Creases is such a thrilling ballet, one that I’m sure will reveal layers in each crease each time I see it. 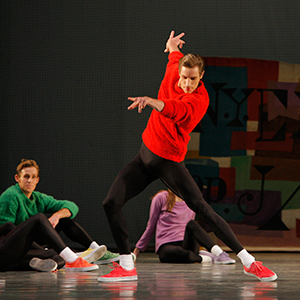 The final ballet of the afternoon (and the final one for my 2012-2013 season) was my favorite ballet, NY Export: Opus Jazz. The Jerome Robbins ballet set to Robert Prince’s music never fails to excite me.

I love the exuberance of the choreography and the performance. It’s like these teens are saying, it’s hot (and it was on Saturday), but we’re young and we’re going to have fun!

I missed the feistiness of Georgina Pazcoguin in the “Statics” movement (it was danced by Gretchen Smith, instead), but I absolutely loved Ashley Laracey and Taylor Stanley in “Passage for Two.” As is always the case, the spirited ballet ended much too soon but it was nothing short of exquisite while it lasted.

The New York City Ballet spring season continues through June 9. Visit nycballet.com for more information and to purchase tickets. (There are two more chances to see In Creases: Tuesday, June 4, and Saturday, June 8, in the afternoon.)