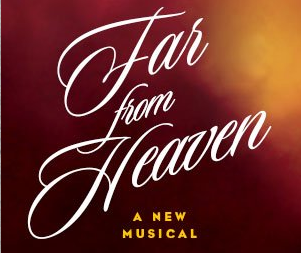 The musical adaptation of Todd Haynes’s film Far from Heaven, now playing at Playwrights Horizons, is a faithful adaptation of the movie, which is sort of neither here nor there in terms of my taste. I passively liked the film and making it a musical doesn’t do it any favors, despite my expectations and proclamations of support before I saw it.

Far from Heaven (you might remember the 2002 film, which starred Julianne Moore, Dennis Quaid and Dennis Haysbert) centers on Cathy (Kelli O’Hara), a picture perfect housewife in Hartford, Connecticut, circa 1957. She’s married to successful businessman Frank (Steven Pasquale) and they have the requisite two children. Cathy’s life becomes unsettled when she discovers Frank is a homosexual, and, even more scandalous in her gossipy town, when she befriends her black gardener, Raymond (Isaiah Johnson), who has taken over the family business after the passing of his father.

When anticipating the musical, directed by the terrific Michael Greif (Rent, Next to Normal) I thought the story lent itself nicely to this kind of treatment. There are plenty of moments of heightened emotions, which are the moments at which songs occur in a musical. But this adaptation, with a book by Richard Greenberg (The Assembled Parties) and music by Scott Frankel and lyrics by Michael Korie (they are the songwriting team behind Grey Gardens), can’t seem to make those moments resonate.

All that said, some of the songs (that is, the full songs, not the snippets and recitative), which aim to evoke the fuller, more lush, more traditional scores of the time, are great for character development and moving the story forward. I particularly like the Cathy-Raymond duet in act one, which sees the two discussing a piece of abstract art. It nicely lays out the overarching lesson of the show: we all have different perspectives and see things differently, but those differences don’t mean anyone’s opinion is wrong.

During intermission, I found myself wanting more for Steven Pasquale (The Intelligent Homosexual’s Guide to Capitalism and Socialism with a Key tothe Scriptures). Pasquale is incredibly talented but his strong voice was being underused and wasted on snippets of jaunty songs. I was quite pleased when he had an opportunity to not only flesh out his character but also sing a strong ballad in act two.

As the outsider Raymond, Isaiah Johnson (Peter and theStarcatcher) is sensational. He gives an intriguingly restrained performance. He is charming without being a cad and Johnson’s voice (when allowed to shine) is captivating.

Allen Moyer’s scenic design (combined with Peter Nigrini’s projection design) is skeletal and efficient for the small off-Broadway space, but it did feel cramped. If Far from Heaven makes the not-too-far jump to Broadway, I hope they enhance the set and give the players more room to breathe (and also block the moving structures so they don’t block our view of pivotal moments). Kudos are also due to Catherine Zuber for her pretty costumes and Kenneth Posner for his moody lighting.

As it is, Far from Heaven is meant to show off the virtuosity of its leading lady. Kelli O’Hara (who has been working for years though this marked the first time I had the chance to see her on stage) sounds lovely, especially in the regretful and poignant “Tuesdays, Thursdays.” (The terrific song could have used a little more oomph, production-wise.) She is layered and vulnerable as a woman who is breaking the mold and, for the first time, exploring life beyond the perfectly manicured hedges of her Connecticut home.