Graceland begins by telling you the show is based on actual events, but for me that was neither here nor there. Created by Jeff Eastin—the creator of USA Network’s White Collar (which is much better than some snubs might give it credit for)—Graceland looks in on a mélange of undercover law enforcement agents living under one roof. That roof is a beautiful beachfront home that was seized from a drug kingpin, who happened to be an Elvis fanatic and called his estate Graceland.


New to Graceland is Mike Warren (Aaron Tveit (Catch Me if You Can, Les Miserables)), who just graduated from the FBI academy at the top of his class. Though he was hoping for an assignment in DC, Mike is excited to go to California and go undercover because it means training with a veteran agent who has been Mike’s idol, Paul Briggs (Daniel Sunjata).

While the setup sounds like it could be just another buddy-cop show or some procedural shlock, it rises above its peers. True, it’s slickly produced and highly stylized, like many of the other shows on USA Network, but it is also much grittier (meaning it’s actually more interesting) and, similar to White Collar, has intriguing story arcs for its characters. So rather than each episode being about a particular case, I can tell from the pilot episode that the cases are just background and the focus is really on the characters. (Fitting, since USA Network’s tagline is “Characters Welcome.”)

So whether you’re looking for a fun summer show, you like the USA Network brand or you just want to see the dreamy and talented Tveit on your TV, tune in to Graceland on Thursdays this summer.
Graceland premieres on USA Network on Thursday, June 6 at 10pm. The pilot episode is available now on most cable providers’ on demand channels. 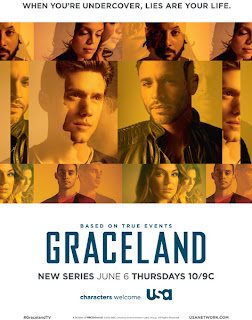