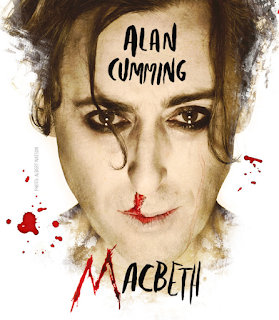 I don't want to give anything away so I won't say much more about the construct of the show, directed by John Tiffany (Once) and Andrew Goldberg, with scenic design by Merle Hensel, lighting design by Natasha Chivers, sound design by Fergus O'Hare, video design (an integral part of the storytelling) by Ian William Galloway and music (effectively eerie) by Max Richter. Having finished reading the "source material" just days before seeing the show, I did not have any trouble following along. For those concerned that they might, never fear: there is a handy character guide and synopsis in the Playbill.

I was most struck by the physicality brought to Lady Macbeth and her scenes with her lord. While reading the play, it's easy to see how Lady and Lord Macbeth are opposing forces of one creature and in this production, that is highlighted. Macbeth is known for his ambivalence, and Cumming brings to light the fascinating dichotomy of the two characters, who just might represent parts of one whole. Cumming's performance and Tiffany and Goldberg's direction also make express a psycho-sexual aspect to their relationship and what drives each of them to madness that offers an illuminating look into man's psyche.