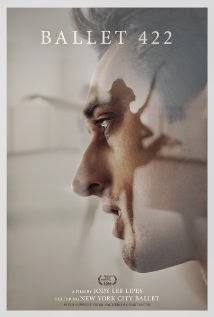 Just a quick note about the new documentary Ballet 422, which is enjoying its world premiere at the Tribeca Film Festival.

Directed by Jody Lee Lipes (film adaptation of NY Export: Opus Jazz), this gives audiences a peek into what's involved in bringing a new ballet to the stage. The subject is NYCB dancer and rising choreographer Justin Peck, and Ballet 422 follows him as he creates Paz de La Jolla, which premiered at City Ballet in January 2013, and was the 422nd ballet made for the Company.

What's fascinating about the style of film making is that it doesn't intrude on the process or interpolate a point of view. There are no "talking head" interviews, no voice overs, no underscore. It's just fly-on-the-wall POV, which is rather refreshing. It allows us to be observers, just like Lipes and assistant cinematographer Nick Bentgen were when filming.

I also think it's interesting to get a look at the process—to see the stops and starts; to see Peck trying to figure it out on his own and then to have to convey his vision to his dancers; to watch Peck, who is still a dancer with the Company (he's now a soloist but when he was choreographing Paz de La Jolla he was a corps de ballet member), become his peers' boss.

Typically, "behind the scenes" movies and TV shows, like Glee, for example, don't show the mistakes. They only show the finished product, which is disingenuous. It takes a lot of creativity, collaboration, trial and, yes, error. Though, as presented, the process in this instance was fairly drama free, you do get to see that Peck doesn't get it right the first time every time; neither do the dancers (principals Tiler Peck (no relation), Amar Ramasar and Sterling Hyltin, among others); neither do the designers or the orchestra.

And lest you be wary of seeing things being made, this isn't a law and it isn't a sausage. There's nothing revealed in here that will turn you off from ballet, and it doesn't even approach demystifying the process to the point where the ballet isn't magical. Indeed, as the credits rolled over a shot of Lincoln Center, I longed to see Paz de La Jolla again, and I grew ever more impatient to see Peck's newest work, Everywhere We Go, which will have its premiere at NYCB's spring gala on May 8.
Visit the Tribeca Film Festival site to learn more about Ballet 422, and visit nycballet.com to learn more about the Company's upcoming spring season and to purchase tickets.