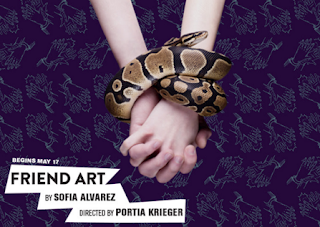 Friend art, according to a faux dictionary definition emblazoned on the wall of Second Stage's uptown theatre, is "art a friend makes that a person is forced to go see and/or support out of obligation to the friendship." With Friend Art, playwright Sofia Alvarez explores the challenges and opportunities inherent in friend art.

Friend Art focuses on four friends: engaged couple Molly (a strong Zoe Chao) and Kevin (Aaron Costa Ganis), and ex-couple Lil (Anabelle Lemieux) and Nate (Constantine Maroulis). When Molly was in her 20s, she was pursuing her dream of being an actress. Now in her early 30s, she has a corporate job, one with stability and a comfy paycheck. Kevin, 32, also has a corporate job, and is about to start law school at GW (my graduate school alma mater!). Kevin and Nate have been friends for a while, even before Nate and his band became a one-hit wonder. Lil, slightly younger than all of them, is a performance artist.

The set up is that Lil's performance art is friend art, and the other three only go to see it out of obligation. But, in a cliched turn of events, there's partner swapping among the pairs, with the cooler, hipper Lil and Nate helping Kevin and Molly, respectively, loosen up and "be more real." Throughout, Kevin and Molly question life choices (and how to feel about them), the struggle to balance art and commerce, and the virtue of being honest about what you want.

The thing is, Friend Art doesn't rise above the level its title suggests. There are moments that suggest Alvarez is a good writer and that the ideas in Friend Art have potential; there are moments that hint at what could be great discussions (about life goals; about societal differences between men and women; about moving beyond a state of arrested development and being a responsible, contributing adult), but Alvarez only gives us seeds. She doesn't delve into anything too deeply, and, in fact, seems to abandon what had been presented as the A-plot.

Indeed, most of the play seems to be about Molly's arc, and, perhaps, Molly and Kevin's arc. Yet their great crisis comes to a head in the penultimate scene and then is "resolved" with a throwaway line in the final scene—a scene that involves neither Molly nor Kevin. The closing scene focuses on Lil and Nate, and is, perhaps, Alvarez's attempt to bring some sort of closure to their relationship. But it falls flat because there had been nothing leading up to that that made me care about either of them.

Up to that point, Lil, sort of the manic pixie dream girl of modern rom-coms, and Nate, the semi-famous cool guy (this did not seem like a stretch for Maroulis), are more devices than characters; they are there so that Molly and Kevin can discover who they are and what they want. When the blackout came after Lil and Nate had their final exchange, I thought, "Is that the end?" Then someone started clapping, the lights came up, and the four actors took their bows. Yes, it was the end, but it wasn't really a conclusion.

This was disappointing. Not that the rest of Friend Art, directed by Portia Kreiger, was really fantastic, but, as I said, there were moments. Moments when I could wholly relate to Molly. Here is a woman who has/had artistic passions but left them behind in pursuit of a stable life. After several years of rejection as an actress, Molly took steps to take care of herself. In a revealing speech (addressed to Nate), Molly says she should have been born 15 years earlier so that she would have been 20/30 in the 80s, a time when people weren't trying to be cool, they were just trying to be rich. She says, "I would have made a great yuppie."

Now, it's not that I think greed is good, but I can understand the way Molly feels out of place, and feels she has to hide her true feelings and intentions (that is, wanting to make money). There's such a premium these days on being cool and quirky and fun and cute, but some people are, as the kids say these days, basic. They just want a roof over their heads and to pay off their student loans. Not everything in their lives is artisanal; in fact, they like shopping at big-box stores. (The horror, right?) I understood Molly, which is why I felt short-changed in the end. I saw glimmers of hope for a character study of a modern young woman, and instead I got friend art.
Aaron Costa Ganis Anabelle Lemieux Constantine Maroulis off-Broadway play Second Stage Sofia Alvarez Zoe Chao