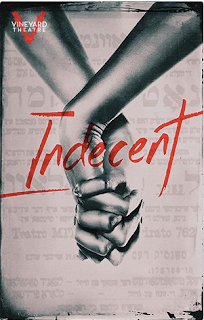 Though Paula Vogel's Indecent is a new play and tells a story I didn't know, it reminded me of stories I've heard before. With the subtitle, "the true story about a little Jewish play," Indecent tells the tale of Sholem Asch's play, God of Vengeance.

In the early 1900s, Asch was a Polish Jew and a writer. Shortly after getting married, he wrote "a little Jewish play," and tried to get it produced. The trouble was that the little Jewish play depicted Jews as—shonda alert—actual, flawed human beings, humans with desires, and, ahead of its time, lesbian characters. At first, power players in the Yiddish theatre scene were wary of producing God of Vengeance, afraid of how it portrayed Jews. Asch challenged, "Why does every Jew on stage have to be a paragon?" Why can't Jews on stage, he argued, represent the full complement of Jews in real life? The power players were unmoved.


But Asch persevered. God of Vengeance became the little play that could, with a Yiddish theatre troupe traveling and performing throughout Europe until finally, in 1923, landing on Broadway. The road to Broadway wasn't smooth, and their stay there was unceremoniously cut short. Before getting the green light, the troupe, now sans Asch, who'd become a bit of a recluse, was forced to make cuts and changes to the script. Significant ones.

Producers thought the rain scene, in which two women fall in love—compared throughout the show to the Romeo and Juliet balcony scene—was indecent. Without reading the changes, Asch signed off, but the players were not happy. They felt that without the rain scene, the relationship between the women felt predatory and antagonistic rather than like a natural, loving development. It was the only way the show would be produced, though, so up went the curtain. Citing obscenity laws and deeming the material, you guessed, indecent, the curtain quickly came back down, and the players were arrested.  (The other story I was thinking of here: N.W.A.'s struggle for stardom.)

What follows is an accounting of all that followed (sort of a la Shuffle Along, or, The Making of the Musical Sensation of 1921 and All that Followed). We see the troupe trying to fight the obscenity charges, and we see Asch so overwhelmed by his fear of judgment that he does little to aide his players. We see an Asch acolyte (circa the 1940s) try to coax Asch out of his shell and get God of Vengeance produced, to no avail. And we see a scrappy telling of the play bring comfort to Jews in concentration camps. (God of Vengeance's legacy lives on; people tell its story, in the vein of Hamilton.)

The tight ensemble includes Richard Topol as Lemmi, the stage manager, who serves as our guide. We are, more or less, seeing the story through his eyes. Another standout is Katrina Lenk, who plays one of the actors portraying one half of God of Vengeance's lesbian couple. Director and co-creator Rebecca Taichman (Familiar, Stage Kiss) incorporates Christopher Akerlind's lighting design and Tal Yarden's projection design well, setting the mood and helping us keep track of where and when we are.

Indecent is a well-crafted and interesting play (with music). Though the structure and the very conceit of digging into and reflecting on our own history did bring thoughts of other recent artistic endeavors, there are more than enough specifics—culturally, historically, and otherwise—to distinguish it from the pack. What resonates the most is Asch's original question to his peers, "Why does every Jew on stage have to be a paragon?"

This is an argument many make these days when talking about the representation of women, LGBT people, and other people in minority groups (and the intersection of all the cohorts). Why, for example, does a woman on stage or screen have to be perfect at everything? Are women actually flawless? Of course not, and, most often, it's their flaws that make them interesting and give them character. So why not show that, mess and all, on stage and screen? No doubt Vogel (How I Learned to Drive) and Taichman were drawn to those parallels when delving into Asch's story.
Indecent Katrina Lenk off-Broadway Paula Vogel Rebecca Taichman Richard Topol vineyard theatre