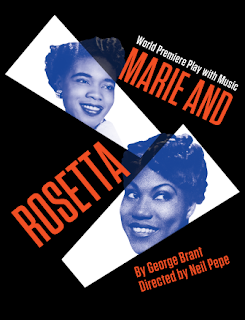 I had never heard of gospel stars Sister Rosetta Tharpe or Marie Knight, and I'm not a churchgoer, but damn it if Kecia Lewis (Rosetta) and Rebecca Naomi Jones (Marie) aren't providing a magical, religious experience in George Brant's play with (lots of) music, Marie and Rosetta. 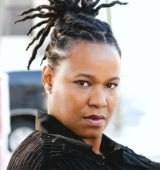 Set in 1946 Mississippi, Marie and Rosetta, directed by Neil Pepe, lets us in the room where Marie, a 23-year-old aspiring singer, comes under the tutelage and becomes a colleague of established gospel singer, Sister Rosetta. As the two women get to know each other and groove to the soul-shaking music we get treated to two vocal powerhouses raising the roof.

Kecia Lewis (Dreamgirls, Leap of Faith) commands the stage as the swinging Sister Rosetta, a full-fledged diva in the most wonderful way. Rosetta is strong-willed, and passionate about her art (she insists that all the singing is in joy, it's all a celebration), and Lewis brings the bombast and puts her hips into the music. She's also affecting during more tender moments, like when Sister Rosetta recalls a time when she was a child, singing for white folks, and learned her true worth. And one of my favorite ladies on the boards, Rebecca Naomi Jones (American Idiot, The Fortress of Solitude) depicts a spellbinding transformation in Marie, who begins as a meek fangirl and emerges an emboldened artist in her own right.

(It should be noted that while Lewis and Jones appear to be their own band, playing piano and guitar, they are, in fact, aided by guitarist Felicia Collins and pianist Deah Harriott, both phenomenal players.)

The ending justifies the setting (a funeral parlor—it's not macabre, I promise), and also offers a clue as to why Brant might have written this, rather than simply staging a gospel concert. Being gospel singers, much of Sister Rosetta and Marie's repertoire had been around for years before they got on the scene. They keep singing to keep the songs alive, and so playwright Brant, one could argue, wrote Marie and Rosetta to keep these women alive. (In fact, there's a petition to put Sister Rosetta in the Rock and Roll Hall of Fame.)

That sense is palpable, and it gives the show pathos and dramaturgical heft (so it doesn't, perhaps, end up in a sort of genre limbo, like The Total Bent), but for me, it was secondary. Witnessing Lewis and Jones give everything they have in service of these hallowed songs—and that alone—was worth every penny.
Want a taste of the musical glory? Watch below as the ladies perform "Didn't it Rain?"