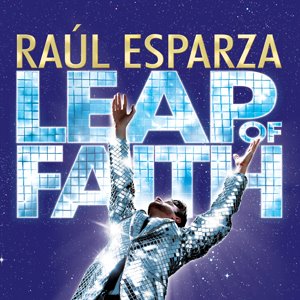 Even though the movie upon which Leap of Faith is based is 20 years old, it’s plenty relevant today: people are down on their luck and looking for something to believe in. Whether that’s a god, an institution or yourself or your brethren, sometimes you have to believe and just take that leap of faith. And what a joyous leap it is!

The fun starts when you walk into the St James Theatre. The large and historic theatre has been taken over by a revival (the church kind, not the Anything Goes kind), so when you enter the theatre you’re really entering the revival tent. There are TV screens set up throughout the house, as you might see at one of those mega, Evangelical churches, and throughout the show, whenever we’re in the revival, we get to see close ups of what’s happening on stage. Robin Wagner’s scenic design and Shawn Sagady’s video coordination immerse the audience in Jonas Nightingale’s world right away, and help carry you from New York to Sweetwater, Kansas, where most of the show’s action takes place.

With a book by Janus Cercone (who wrote the Leap of Faith screenplay) and Warren Leight, Leap of Faith tells the story of Jonas Nightingale and his journey to find his faith. At rise, Jonas (Raul Esparza) and his Angels of Mercy (Kecia Lewis-Evans, Krystal Joy Brown, Bryce Ryness and others) are broken down at a gas station in Sweetwater (en route to Topeka), and due to Jonas’s slick and conniving ways (i.e., he’s swindled and conned just about every other town) the revival crew has no choice but to pitch their tent in Sweetwater. Jonas’s sister Sam (Kendra Kassebaum) warns that the town is poor so their take won’t be too large but Jonas is undeterred. He remains so, even when the crew is confronted by Marla McGowan (Jessica Phillips), a strong, no-nonsense single mother who’s wise to Jonas’s ways—and who also happens to be the town sheriff. Jonas is instantly intrigued. Of course, to complicate matters, Marla’s son, Jake (Talon Ackerman), is confined to a wheelchair but has faith in Jonas’s healing powers. Marla’s a skeptic. The plot is fairly predictable, even if you haven’t seen the Steve Martin movie (which I haven’t), but it’s a fun journey, with great songs and production numbers and stellar performances along the way.

In a meet and greet video, Raul Esparza says that he thinks Leap of Faith represents composer Alan Menken’s best score to date. I’m inclined to agree. With stylistic motifs for each character, the score is full, catchy and evocative of just the right emotions at just the right times. Menken’s music is well-paired with Glenn Slater’s lyrics, which strike the perfect balance of semantically interesting and characteristically insightful. I particularly liked and could relate to “Long Past Dreamin’,” Marla’s song at the top of act two. In it, we delve into Marla and get a deeper sense of who she is and where she’s been. I think many folks can relate to being at the end of their rope, not letting anyone take care of them and lacking faith that something good will come their way. Of course, the title song will help make a believer out of anyone!

All the songs are expertly expressed in Sergio Trujillo’s choreography. As executed by the talented company, his choreography is sharp, technically complex and makes you want to jump from you seat and join in! Featuring Lewis-Evans, Brown and Leslie Odom, Jr., “Dancin‘ in the Devil’s Shoes” lets the company show off its fancy footwork. But even in less boisterous ditties, like the opening “Rise Up,” Trujillo moves his dancers so you can see their soul and passion coursing through them. 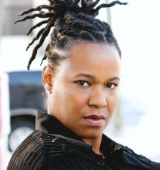 And what a soulful and passionate company this is. Kecia Lewis-Evans, as Ida Mae (an Angels of Mercy leader), nearly brings down the house in gospel numbers like “Lost.” As her daughter Ornella, Krystal Joy Brown brings plenty of sass and vocal strength (most effectively on display in “Are You on the Bus?”). And as Ida Mae’s son Isaiah, Leslie Odom, Jr., shines. He’s a foil for Jonas, but his vocal prowess is nearly equal. 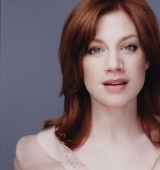 Dear readers, get ready for Jessica Phillips. Though the beautiful redhead has plenty of credits to her name (for example, she was Alice Ripley’s standby in Next to Normal), this is her coming out party. She’s glorious as a sassy, no nonsense broad with a vulnerable streak. Her voice sounds kind of like Idina Menzel’s, but with less edge and more sweetness. It can’t be easy going up against Raul Esparza’s powerful voice and charisma, but Phillips rises to the occasion, showing off her own vocal chops and developing sizzling chemistry with her leading man.

That leading man is the one and only Raul Esparza. I’ve said it before, dear readers, and I’ll say it again: When Raul Esparza is on a stage, you go watch. I mean, sweet Thespis, this man is incredible! Even though he first appears on stage in a suit that makes him look like the shark-like con man Jonas is (costumes are by the dependable William Ivey Long), Esparza instantly charms his way in and, through both snark and seduction, captivates you for the next two and a half hours. (He also appears in tight black leather pants in act two. You’ve been warned.) Esparza has an unbelievable voice that is matched by an unparalleled magnetism. (Both these qualities are best shown off in the riveting “Jonas’ Soliloquy,” a classic moment-of-truth song that seems made for Esparza.) He gives a knock-out performance that I can’t wait to see again and again.

So come all ye faithful, and non-believers, too. Step into the revival tent and “into the light,” where you’ll be uplifted by the sensational Leap of Faith.

Visit leapoffaithbroadway.com for more information and to purchase tickets.

(Some headshots taken from the Leap of Faith "meet the cast" web page. Production stills, by Joan Marcus, are from Broadwayworld.)