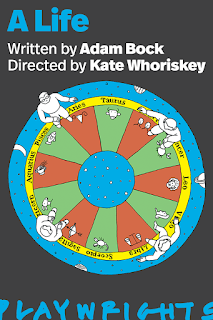 Playwright Adam Bock presents an examined life from the perspective of Nate Martin (David Hyde Pierce), a middle-aged gay man who is keen to make sense of his life via astrological charts. (He's not a wack-a-doo, I promise.) The play begins with Nate directly addressing the audience, as if we're a psychiatrist to whom he's proving his mental health. 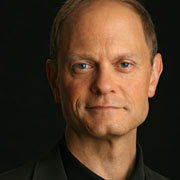 I was unexpectedly moved by Pierce's performance. Maybe it's leftover (petty) resentment that he won the Tony Award in 2006 (for Curtains) instead of Raul Esparza (for Company), but I always think he's trying on stage, going for laughs or pastiche rather that verisimilitude. For example, in my review of Vanya and Sonia and Masha and Spike, I quipped that Pierce was doing his best Mark Rylance impression. But in A Life, Pierce proves worthy of his Tony, fully inhabiting a real person. It's a touching and sensitive portrayal, one that instantly hooked me, and made me care deeply about Nate.

Layers and insights are revealed in time (thanks to director Kate Whoriskey and scenic designer Laura Jellinek), and I savored Bock's Annie Baker–like silences and extended moments of stillness, of seemingly nothing happening on stage. I also cottoned to the couple of scene transitions in which we watch the scenic transformations. The transition from one moment and scenic set up to another takes time, giving us those moments of reflection, time to ponder the ending tableau, with everything stripped away, nothing but a plain pine box and Nate, once again, addressing the audience—that's a life.
Adam Bock David Hyde Pierce Kate Whoriskey off-Broadway play playwrights horizons