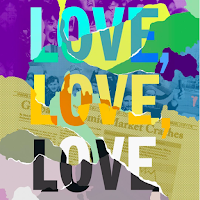 The Beatles famously sang, "all you need is love (love, love)." Were the Fab Four right? That question is at the crux of Mike Bartlett's new play, Love, Love, Love, enjoying its New York debut in a terrific Roundabout production.

Bartlett (Cock, King Charles III) is a great writer and a keen observer of relationships, and he proves as much with this decade-spanning serio-comedy that traces the relationship of Kenneth (Richard Armitage, appealing, commanding, charming) and Sandra (Amy Ryan, sharp, cunning, captivating) from the swinging 60s to present day, all under the direction of Tony winner Michael Mayer (Spring Awakening, American Idiot).

Act one begins in the 60s. Feminism is blossoming. People are exploring, trying new things. In the process, they are finding out or coming to terms with what old things mean under these new circumstances. This dynamic is explored as we meet Kenneth and Sandra, as well as Kenneth brother, Henry (Alex Hurt). Kenneth is crashing on Henry's couch but, at rise, Henry is trying to convince Kenneth to hit the road as Henry is expecting the beautiful, feisty Sandra at any moment and would like some privacy. Henry and Sandra haven't exactly established their relationship yet, though (Is it love? Lust?), and when Kenneth and Sandra have a moment alone, Sandra propositions him: "Are you ready?" "For what?" "An adventure."

Cut to act two. It's the 80s, rife with Hippies-turned-yuppies and their offspring. The boomers became exactly what they never wanted to be, but there's still some of their younger selves there, bubbling under the surface, tantalizing them with what they thought might be, what they wonder might still be possible. Their discomfort with love, or what has become of their love, is undeniably affected and has an undeniable effect on their children, Jamie (Ben Rosenfield) and Rose (Zoe Kazan, appropriately intense, a raw nerve).

In act three, we see Jamie and Rose as adults, though it's arguable how grown up or well-adjusted they are. Jamie, enabled by his father, has been allowed to settled into slacker's existence, while Rose, who still has a contentious relationship with her mother, is struggling to be a productive, contributing member of society. (As a women in her mid-30s, I most closely related to Rose. She's "the good daughter" who loves her parents and listens to them, yet somehow still ends up struggling, with what she wants just out of reach.) In a climactic moment, Rose, furious with her parents and their tough love, chastises them, claiming, "You didn't change the world. You bought it!"

And so playwright Bartlett entreats the audience to think about love, love, love, in all its shapes and sizes, in all the directions it can take you. What's it like to love when you're young and idealistic and anything is possible? When you're older and reality sets in? When love changes? Maybe love is different for everyone. Maybe it's selfish. Or maybe it's simple, and all you need.