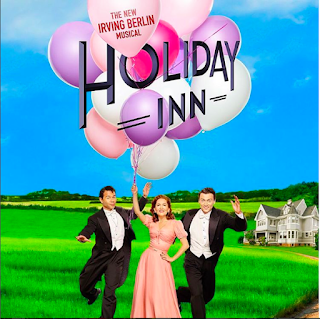 Holiday Inn, the new old-fashioned musical. Though the musical is being touted as the “new Irving Berlin musical,” it borrows heavily from musicals from days of old, like when Mr. Berlin was actually writing new music and musicals. There’s a well-balanced book, by Gordon Greenberg and Chad Hodge, and score (packed with notable Irving Berlin tunes, as well as new dance arrangements by Sam Davis), and the show-within-a-show device is used, as it was in the Bing Crosby-Fred Astaire movie upon which this is based.

I don’t remember the movie well enough to say exactly what’s the same and what isn’t, but the gist is the same. Jim (Bryce Pinkham) and Tom (Corbin Bleu) are an up-and-coming act on vaudeville/club circuit circa 1946. They are joined by Lila Dixon (Megan Sikora), who, at the top of the show, is also Jim’s girlfriend. Just as they are about to get their shot—a call from Hollywood—Jim decides he wants to give up show business and settle down with Lila. He even buys a farm out in Connecticut.

Jim stands firm, and heads to the farm while Lila and Tom go on a six week tour. Back at the farm, Jim meets Linda (Lora Lee Gayer), whose parents owned the farm and who, though now a school teacher, once used to desire a career in showbiz. Cut to: the farm’s a shambles (despite the efforts of groundkeeper Louise (a hilarious Megan Lawrence), and Jim decides to put on a show. They open the farm house as the titular Holiday Inn, opening their doors and performing on holidays. (This concept, as it did in the movie, allows the show’s creators to use dozens of Berlin’s holiday-themed songs; you know, the ones, like "White Christmas," that the Jewish immigrant wrote to fit in as a patriot in early 20th-century America.)

Anyway, Lila ditches Jim for Hollywood, Tom shows up drunk and wants to take Linda as his new dance partner, and Jim has to decide, like Peggy Sawyer, if show business is for him. It’s a simple plot, typical of musical comedies from the 40s, mostly meant to entertain and be the conveyance for songs and dances. Lots of songs and dances.

And by this measure, the new old-fashioned musical is entirely pleasant. It’s fun and fluffy, and has a creamy, sorbet-colored palette that’s pleasing to the eyes. (Scenic design; Anna Louizos; costume design: Alego Vietti; lighting design: Jeff Croiter.) The book feels fresh and modern (I guess that’s the “new” part of the musical), though some of the modernisms come off as a little anachronistic. That’s no bother, though. The repartee between Jim and Linda is engaging, and all the women (Linda, especially), seem plucky and self-sufficient.

Making up the cast is a talented group, under Greenberg's direction. Megan Sikora (How to Succeed...) does nice work as the wannabe starlet, Lora Lee Gayer (Doctor Zhivago) has a lovely voice that’s given a chance to shine on several occasions, and Megan Lawrence (Hair) provides hardy comic relief. Tony nominee Bryce Pinkham (A Gentleman’s Guide to Love and Murder, The Heidi Chronicles) is thoroughly charming, as expected.

The real discovery, for me, is that Corbin Bleu is a consummate song-and-dance man. I’d never seen him in anything, but knew that he was in High School Musical, and that he played Usnavi in In the Heights toward the end of the show’s Broadway run. He has a nice voice, but slap some tap shoes on him, and boy can he entertain you. Bleu shows a impressive dance facility, nimbly moving around the stage, whether on his own or while lifting a chorus girl. (Choreography is by Denis Jones.) He has the kind of skills not often called upon in today’s musicals, but that seem tailor-made for this new old-fashioned musical.
Broadway Bryce Pinkham Corbin Bleu Holiday Inn Irving Berlin Lora Lee Gayer musical