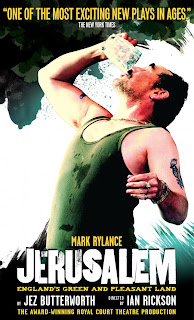 I will not cease from Mental Fight
Nor shall my sword sleep in my hand:
Till we have built Jerusalem,
In England’s green and pleasant land.

You know, if not for all the drugs and mayhem descending upon Johnny “Rooster” Byron’s Flintock home, the English forest and its rabble inhabitants would be idyllic - would be Jerusalem. But oh, those drugs and mayhem.

It’s St. George’s Day in Flintock, Wiltshire, England, and while en route to and in between the merry celebration of England’s patron saint, Ginger (Mackenzie Crook), Lee (John Gallagher, Jr.), The Professor (Alan David) and several other vagabonds check in with Rooster (the incomparable Mark Rylance) for a fix. Of just what is open to interpretation. Ostensibly they’re there for drugs, but it seems these drifters are all looking for something else. Throughout most of this funny, blistering and thought provoking new play by Jez Butterworth, wonderfully directed by Ian Rickson, I found myself eagerly looking for the redemption. Most of the characters were looking for some sort of redemption, too. But sometimes there’s not redemption. Sometimes there’s just tomorrow. And for some, there’s just the end.

That may sound bleak and I suppose it is, but it’s not meant to discourage you from seeing this fierce new play, now on Broadway for a limited engagement after a critically acclaimed and sold out run in London. On the contrary, I urge you to see Jerusalem, which will have you laughing like crazy, cringing with sympathy and riveted with the raw, ugly side of revelry.

Jerusalem refers not exactly to the holy city in Israel. Rather, it is a hymn which, according to the director’s notes in the Playbill, is “held very dear by the English people. ... Jerusalem itself functions as a metaphor for heaven on earth, where people live in peace and in connection with the land.” Written by William Blake in 1804 and set to music in 1916 by Hubert Parry, the hymn gives faith and inspires unity, and has “helped form an idyllic sense of aspired Englishness.” The concept of Jerusalem is something wished for and dreamed of, and during the three hours we spend enraptured by Butterworth’s characters, we watch these all too fallible humans trying to attain it.

In the first act, we meet the characters and learn the stakes: Lee is leaving, heading off to Australia in search of something; Phaedra, a fairy queen of sorts (an ethereal Aimee-Ffion Edwards) is possibly missing; and, most crucially, Rooster is in jeopardy of being evicted, having irritated his new neighbors, those in the “new estate,” with the late and loud parties and the lost children - the wanderers - always hanging around. None of that matters much to Rooster and his crew, or so they’d have you believe. They just want a spliff, maybe something to snort up their nose (with a little help from - cheekily - a Trivial Pursuit card) and to have a good time with their mates. (In trying to score some drugs from Rooster, Lee, at one point, conceives a mad plan to borrow money, lend the money, buy the drugs, swap and trade for something else, then sell something and finally pay back the original lender. It’s a totally ridiculous scheme, starkly parallel to CDOs and CDSs; in fact, after Lee reveals the plan, Rooster (I think, or maybe it’s Ginger) comments that it’s nutty chicanery like that that got us in to this horrible economic time. Nicely played, Mr. Butterworth.)

Act two is a little more of the same, with more yarns being spun and legends being questioned. It’s also in act two that we meet Rooster’s former flame, Dawn (Geraldine Hughes) and their child, both of whose appearance sparks something in Rooster. (There’s an incredibly intense moment of seduction during which Rooster, with his back to the audience, asks Dawn to look into his eyes. He holds her gaze for a long time; all we see is Dawn’s reaction but we can guess that Rooster’s asking Dawn to look past the broken television set strewn on the lawn and the empty beer and alcohol bottles laying about and look into his soul - to see the man she knows is in there, the man she still loves. To see that there is still some humanity left in the worn out drug dealer.)

Finally in the third act most things come to a head - it’s reckoning day. No one is satisfactorily redeemed but they all have a fitting, honest conclusion to their journey, or at least to the part of their journey to which we're invited. Sure, there are plenty of questions left unanswered (What happens to Ginger? Does Lee find the adventure he was looking for? Is Rooster a good man doing bad things or is he more dodgy than his usually jovial demeanor lets on - is he Jesus the savior or the devil incarnate?) but I suppose that’s the point. To leave us, the audience, thinking about our own Jerusalem and what we have to do to get there.

At one point in the play, Rooster is rhapsodizing about a giant he met. Everyone, except Ginger, is hanging on his every word. He goes on and on, acting out the encounter (he stands in for the giant and uses a lighter to stand in for him) during which the giant gave him a drum which he could use to summon the giants in the future, should he need their assistance. Ginger is incredulous and almost convinces Lee and the others that Rooster is just telling a tall tale. But one challenge from Rooster and all the wanderers - who are looking for something to believe, looking for an ersatz family and home - buy in fully and begin praising Rooster for having lived through the gigantic encounter.

But later on, Rooster begins banging on the drum, ostensibly crying out for the giant to come help him. Yet, when he’s doing so, he’s calling out the names of all the Byrons who’ve come before him. So is he calling out to the kind of literal giant Jack met up that bean stalk or is he calling out to the figurative giants of his past? And what do we do with those giants? Do we stand on their shoulders and improve our world, as we try to build “Jerusalem in England’s green and pleasant land,” or do we hide behind the giants, forever afraid of facing the truth and the consequences of our actions? All these wonderful questions are what we’re left to wrestle with.

Dear readers, that’s just the play. What about the execution, you might ask (especially knowing how much I enjoy watching both Mark Rylance and John Gallagher, Jr., on stage). Well, not to worry: Jerusalem is in very good and capable hands.

Walking in to the Music Box Theatre you see a lightly tanned scrim emblazoned with a red cross (St. George's symbol). The show begins with Phaedra singing a soft, angelic hymn and then your senses are immediately assaulted with rave music (terrific sound design by Ian Dickinson for Autograph) as the scrim goes up to reveal Ultz’s forest of a set. The party stops and the lights (designed by Mimi Jordan Smith) burst through, letting us know it’s a new day. There’s a random spare tire here and a broken television set there, set off by an errant car seat, plus other talismans of partying. And then we get to see some great performances. 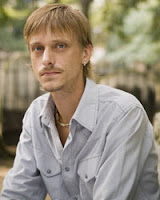 Mackenzie Crook, beloved for his work on the original, UK version of The Office, is Ginger, not quite a contemporary of Rooster’s but not quite as young as Lee and the others. He’s a user but often is also the voice of reason. Sort of. Crook’s performance reveals that Ginger knows he’s too old for this but yet he can’t quite quit. As someone notes late in the play, time goes on but some things stay the same. And that seems to be Ginger’s struggle throughout; he has dreams but something is holding him back. Crook brings depth to Ginger so we know he’s not just a junkie - there’s something underneath the worn clothing and carefree ethos, and because we know this, we root for Ginger to break free of whatever shackles are keeping him from his dream.

My dear John Gallagher, Jr., is having a ball as Lee, who’s after an adventure if he can just make it to the bus station on time. This role could easily have been thrown away and overshadowed by the flamboyant Rooster but Gallagher is too good to let that happen. His Lee is the emotional center of the group of misfits. His Lee is jovial and actually smiles - something we don’t often see Gallagher’s characters doing. Lee is looking to have a good time with his friends before he skips town, but he’s struggling to express himself. In one scene, Lee can’t seem to find the right words so he keeps repeating the word “right.” Except that because Gallagher is playing Lee, Lee isn’t just saying “right;” he’s saying something deeper and deeper each time he utters the word, until finally he is near tears and his friends gather around for comfort. When I spoke with Gallagher at the stage door, he said that the experience of working on this play has been terrific. Jerusalem was nearly the best play he’d ever read so signing up was a no-brainer. He added that the rehearsal process (most of which was spent in London) was easy and that the whole cast got on well. It’s always a treat to watch Gallagher perform, and I love having this opportunity to see him do something so different from anything else he’s done. 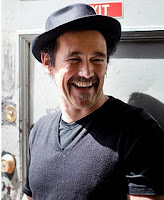 But the star of Jerusalem, dear readers, is the incredible, amazing, fantastic, superb Mark Rylance. Rylance was last seen on Broadway - at the Music Box, in fact - in La Bete, last fall and early this winter. He was terrific as the buffoon Valere and here he surpasses expectations as Johnny “Rooster” Byron. Here’s the thing about Rylance: He’s so present. He’s not playing a part; he’s living the part. (I said as much to him at the stage door and he was entirely gracious, saying that that’s exactly how he sees his job as an actor.) Rylance never asks for a laugh or begs you to cry. He simply (well, he makes it seem simple) lives Rooster’s life. He kicks open his trailer’s door and has fully embodied Rooster. There’s not a note that doesn’t ring true; not a step that seems false. Rylance goes on a rough journey playing Johnny, reaching brilliant highs and succumbing to miserable lows, seamlessly transitioning from utterly funny moments to softly tender and deeply affecting beats. I don’t know from where he draws this superlative performance, but it just further proves my point: If Mark Rylance is on a stage, you go watch.

And you should go watch Jerusalem, dear readers. Don’t let the three hour running time scare you off. (There’s an intermission between acts one and two and brief pause between acts two and three.) The subject matter is real and heavy and powerful, everything a great piece of art should be. It makes you laugh - heavily - and it makes you think - deeply. What more do you want? This year in Jerusalem.

Visit Jerusalembroadway.com to learn more and to purchase tickets.