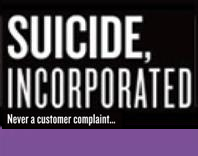 You would think that a play focusing on various aspects of suicide, and particularly writing the suicide note (i.e., figuring out the “why”) would elicit a strong, visceral reaction. It didn’t. It was good and interesting, but that’s all I can muster.

In Suicide, Incorporated, Jason (Gabriel Ebert) is a guy in his late twenties who takes a job at the titular company. Rather than talk clients down from the ledge, at Suicide, Inc., Jason, Perry (Corey Hawkins) and their boss, Scott (Toby Leonard Moore), write their clients’ suicide notes. When a new client, Norm (James McMenamin), comes in, Jason’s conscience is haunted by his younger brother, Tommy (Jake O’Connor). (On occasion, a police officer (Mike DiSalvo) checks in with the fellows.)

Andrew Hinderaker’s play is well written, with snappy, darkly funny dialogue, and director Jonathan Berry paces the action so that the play runs at a quick clip. (Some of the scene changes felt a little rushed, but it’s a small space and you can’t hold in black out for too long, so I understand.) Daniel Zimmerman’s scenic design adds an intriguing element to the play, as sections of the set are revealed over time, letting us into Jason’s life little by little.

The game (and mostly very tall) cast works well together, as they explore the prevalence of suicide among young men, with Moore standing out as the bombastic boss. Still, I didn’t have a strong reaction. I think perhaps it’s because the play has too many hints of an after-school special to be affective. This is a good, well-written and well-acted after-school special, but it expressed its message a little too conspicuously for my taste.

Visit roundaboutunderground.org to learn more about this production and Roundabout Underground’s mission of supporting and nurturing new and emerging talent.