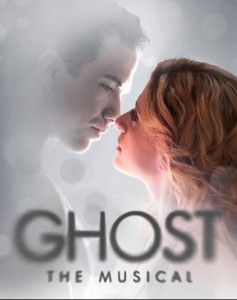 The surprisingly cool thing about Ghost the musical is that it isn’t a stage adaptation of a movie – it’s a movie on stage. From the opening “title sequence” to the photo montage to the spectacular technical effects, this is a lesson in how to translate one medium to another and how to incorporate non-traditional elements into a very traditional (and sometimes stuffy) art form.

It is based on the Demi Moore-Patrick Swayze movie, though, so before delving into individual elements of the show, let’s recap what happens. Sam Wheat (Richard Fleeshman) and Molly Jensen (Caissie Levy) are a couple in love. In their late 20s/early 30s, they’re not married, but as the show opens we see them moving into a spacious loft apartment in Brooklyn. Their friend Carl (Bryce Pinkham) is the third Musketeer, and is helping them move in. About 15 minutes in, Sam and Molly find themselves in a dark alley and Sam is lethally shot. He becomes the titular ghost. Through a medium, Oda Mae Brown (Da’Vine Joy Randolph), Sam communicates with Molly, urging her to go after his killer. In the end, Sam and Molly learn that though ghosts may haunt you, the love inside is carried with you.


Ghost is a tragic romance, but it’s ultimately uplifting. The star of the show, however, isn’t the plot; it’s the pizzazz.

Unifying behind superlative, Tony Award-winning director Matthew Warchus’s vision, the technical elements in Ghost are absolutely amazing, and their integration into the storytelling is seamless, impressive and thoroughly effective. Paul Kieve created captivating and spellbinding illusions. For example, Sam Wheat literally walks though a solid door! (I know, I know: there’s some technical trickery; Richard Fleeshman didn’t actually walk through the door – but it damn sure looks like it!) At another point, Sam appears out of thin air – like a ghost would – and disappears back into the ether just as magically.


There is no set design, per se, as the set is all projected, allowing designer Rob Howell and video & projection designer Jon Driscoll to tell the story in a revolutionary way. It rains on stage. We careen through the subway. Tastefully used videos bring us close ups of some important and intimate moments. It’s really quite spectacular.

And let’s not forget the good old sound and lighting designs. I was thankful for Bobby Aitken and his sound design when I was able to hear all the subtle atmospheric details way up in the mid-mezzanine. And Hugh Vanstone’s lighting design was stunning. In particular, the lighting for the hauntingly beautiful “With You” (a song in which Molly sorrowfully sings about what Sam took with him when he left – it is stirring both lyrically and vocally), is lit in a way that is simply gorgeous. Molly was bathed in light – like some warmth might be coming over her. It was so soft and still and understated – I feel moved just thinking about it. And once he’s a ghost, Sam is lit in this icy blue hue, but just him. The light doesn’t bleed onto anything else. This is an entirely focused and tight production.

Yet, or maybe because of that tightness, throughout act one I found myself having difficulty connecting emotionally to the story. (I suppose it could also have something to do with a lifeless detour into camp in the form of “You Gotta Let Go.”) But the second act held more of an emotional connection. By the end, when Sam and Molly said their final goodbyes, I was definitely emotionally invested and appropriately moved.

Some of the credit goes, of course, to the writers. Bruce Joel Rubin, who wrote the Oscar-winning screenplay, wrote Ghost’s book and lyrics. (Ghost the movie devotees or those who watch the film right before seeing the show will notice a lot of recycled dialogue.) Music luminaries Dave Stewart (from the Eurythmics) and Glen Ballard (famous for producing, among other hits, Alanis Morissette’s breakthrough, Jagged Little Pill) took care of the music and teamed up with Rubin to complete the lyrics. The results are varied. Some songs are too hokey for my taste (like the aforementioned “You Gotta Let Go”); some are standard issue but entertaining Broadway numbers (like Oda Mae’s eleven o’clock number “I’m Outta Here”); and some are transcendent (like “With You” and the Molly-Carl-Sam emotional ballad, “Suspend My Disbelief/I Had a Life”).

Thankfully, we have an incredibly gifted cast bringing this all to life (or afterlife, if you’ll pardon the pun). Da’Vine Joy Randolph makes her Broadway debut with Ghost, and girlfriend is going places. Watching her makes you think, “Whoopi who?” She has a powerhouse of a voice, bringing down the house with “I’m Outta Here.” And she impresses by bringing layers to Oda Mae so that you see the character’s progression, rather than abrupt shifts in personality.

Bloody Bloody AndrewJackson alumnus Bryce Pinkham is featured as Carl, Sam and Molly’s best friend-turned Brutus. Though he isn’t given much to do vocally, when he does step up to the plate, he hits it out of the park. It’s a bit difficult to say I liked him, since his character is despicable, but Pinkham doesn’t play Carl as sinister – simply a regular guy who got in a bad way. I appreciated the choice, and I think the complicated relationship he has with Sam and Molly succeeds because of it. 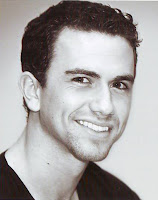 UK sensation Richard Fleeshman continues to play Sam, the role he originated in the premiere, London production. Fleeshman has bona fide vocal chops, which he gets to show off throughout the show. (He also gets to show off his impeccably sculpted body. Even at the stage door on a windy April night, he was wearing a T-shirt with a very deep V. I think he’s contractually obligated to always be showing off his pecs.)

My favorite, though, is the phenomenal Caissie Levy. I absolutely loved her portrayal of Shelia Franklin in Hair, so I was particularly excited to get to, once again, watch her sing on stage. Her voice is so smooth and lovely and full of passion. Her rendition of “With You” will undoubtedly stir something inside of you. She really brings all of Molly to life, and plays her as a strong survivor.


What about some of the iconic moments from the movie, you ask? Well, they’re there. Ditto. “Unchained Melody.” The potter’s wheel. But the latter two are used differently and, I think, more effectively. For example, the potter’s wheel scene comes much later on stage than it does in the movie. The way it looks is much less porn-y and much more sensual, and it feels a great deal more emotional. As it is in the musical, the scene is poignant, and an important moment in Molly’s character development.


So whether you love the movie, just like musicals or want to see the spectacular and breath taking technical wonders, head on over to the Lunt-Fontanne Theatre and believe in Ghost.

For more information about Ghost and to purchase tickets, visit ghostonbroadway.com.