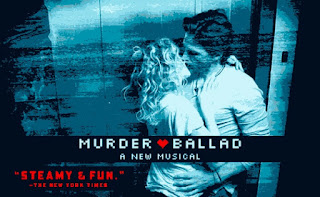 Never fear, dear readers. Murder Ballad is just as raw and sexy and passionate in its downtown home as it was in midtown this past fall. Transferring seamlessly, this production, which features Rebecca Naomi Jones, John Ellison Conlee and Will Swenson reprising their roles and the lovely Caissie Levy tackling the role of Sara, sizzles and pulses as it tells the woeful tale of tangled lovers.

Written by Julia Jordan and Juliana Nash and directed by Trip Cullman, Murder Ballad is the story of Sara (Levy), a young woman who finds herself caught between her husband, Michael (Conlee), and her bad boy former flame, Tom (Swenson). The intoxicating Jones is our Narrator.

It’s a true rock opera—the entire show is sung through and the score really does rock. As many of the cast members have been pointing out in interviews, unlike many of the rock musicals of late this one is by, for and about adults. Unlike its predecessors, in Murder Ballad rock and roll is used to express the passion and mercurial emotions of its characters (rather than as a symbol for rebellion, like in Spring Awakening, for example). I think that’s what makes this connect with adult audiences so deeply.

An immersive experience (though not of the 360 variety like Here Lies Love), the Union Square Theatre is transformed into a bar (just like the Studio at Stage II at MTC was for the show’s autumn run) and the audience sits throughout. (Mark Wendland is the scenic designer.) There are small, cramped tables for the audience in the center, the band on one side, an actual bar (fully stocked!) on another with audience members sitting behind it and more rows of seating on the remaining two sides.

The four players stomp and race and strut all over (including on the pool table that serves mostly as a bed but also other things, including, naturally, a pool table) and get in your face when they’re furiously and fiercely letting out their emotions. With no barriers or physical safeguards between you and the action, you connect to the goings on in a sublimely intense manner.

Going full throttle for about 90 minutes is a superb cast. As I mentioned above, Conlee, Jones and Swenson are reprising their roles. (They and original cast member Karen Olivo can be heard on the cast recording, which is now available.) They haven’t lost a thing in the transfer, and are even more glorious than I remembered. 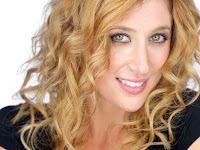 And Levy (Hair, Ghost) is sensational as the conflicted Sara. She is feisty and insatiable when Sara is first with Tom (her Hair costar, Swenson) and then she softens and allows herself to become vulnerable when Sara meets Michael. She continues to walk a fine, fascinating line as Sara struggles with her life choices, all the while showing off her incredible pipes. Levy brings a new and different, more urgent energy to the show and it works wonderfully.

(Read my review of the premiere production.)
Visit murderballad.com to learn more about the show and to purchase tickets.