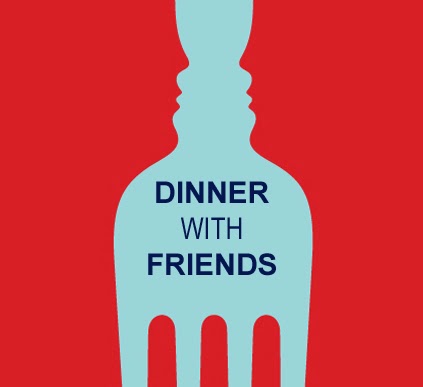 Is it ever so simple as just having dinner with friends? No way, according to Donald Margulies’s terrific and Pulitzer Prize-winning play, Dinner with Friends, being given a great New York revival by Roundabout Theatre Company.

The play moves around in time but centers on dinners (and other meals) among two couples: Gabe and Karen (Jeremy Shamos and Marin Hinkle) and Beth and Tom (Heather Burns and Darren Pettie). Gabe and Tom have been friends since college; Gabe and Karen have been married for about 13 years; Beth and Tom have been married for 12 years. We meet them all throughout act one, as both connections and rifts are revealed. Kicking off act two is a flashback to the summer when Beth and Tom met, having been set up by Gabe and Karen (this scene is the only time all four are on stage together, and it’s vital to fully understanding the characters and the dynamics between all four). We then jump back to the present and continue to see how many people are actually in one relationship.

And that’s the crux of it. As Karen says to Gabe early in the play, “You don’t know what couples are like when they’re alone.” What’s so interesting about Dinner with Friends is that Margulies allows us to look in on pairs—not just the married couples but different permutations of the four—and examine what it takes to make a relationship work. Or, what it means to admit that a relationship is not working.

Throughout, the game cast embodies the characters and their struggles, which are brilliantly articulated by Margulies’s natural, well-observed dialogue. Tony Award-winning director Pam MacKinnon (Who’s Afraid of Virginia Woolf?, Clybourne Park) complements the writing with small but powerful moments and juxtapositions, as in when Gabe and Karen wrap their arms around each other just moments after Beth and Tom, alone in their bedroom, couldn’t have been standing farther apart. Still, it all comes back to Margulies (Collected Stories, Time Stands Still), who keenly captures the minutiae of different relationships and, more specifically, the impact friends’ relationships have on your own.

Early on, we learn that Beth and Tom are divorcing, and for the rest of the time spent in the present, Gabe and Karen are left questioning their own relationship. All of a sudden, something they thought they never had to think about—something that happens to other people—is staring them in the face and it’s scary. Beth and Tom make, separately, cogent arguments for separating, leaving Gabe and Karen to wonder about the virtue of the work they put into their own marriage.

They also struggle to maintain their relationship with Beth and with Tom. (That struggle is brilliantly realized by Shamos (Clybourne Park, The Assembled Parties) and Hinkle, who give stunning, devastating performances.) As we get older, and people change and move around, do we move on from friendships? Do we include in our circle only those who see the world as we see it? What about our friends and lovers who challenge us? Do we exclude them because facing something different is too scary?

So many questions. Those provocations and more are among the reasons this has long been one of my favorite plays (and Margulies a favorite playwright), and why, even though it was written over a decade ago (and adapted for the small screen by HBO) it still resonates today. Challenging or otherwise, human nature doesn’t change. Dinner with friends is always messy.