In other Oscar news, Pharrell Williams will perform his Oscar-nominated song, "Happy," on the telecast. The song is featured in Despicable Me 2. Read the official press release for details.

Meanwhile, The Wolf of Wall Street's producers are getting cheeky in their Oscar campaign.

Several guilds announced their winners last weekend. (Feinberg has analysis of all the festivities.) 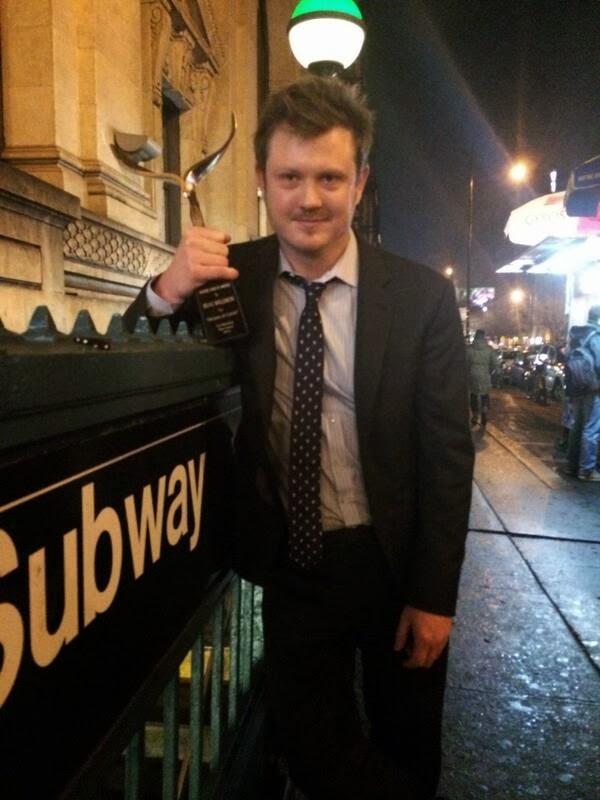 London Critics' Circle Awards—Across the pond, top honors were handed out for excellence in film. 12 Years a Slave won the Best Film award, and its actors, Chiwetel Ejiofor and Lupita Nyong'o also received honors (in the best leading and supporting actress categories, respectively). Ethan and Joel Coen won the screenwriter award for Inside Llewyn Davis. Visit Variety for the full list of winners.

Golden Globes—I know what you're thinking. Yes, we've already been through this year's Golden Globes. But here's the news: The date has been set for the 72nd ceremony. The annual award ceremony will be held on January 11, 2015, with returning champs Tina Fey and Amy Poehler hosting once again. Entertainment Weekly has more.

Santa Barbara International Film Festival—The SBIFF has become a staple of the award season circuit, and this year is no exception. Michael B. Jordan (Fruitvale Station), Brie Larson (Short Term 12), June Squibb (Nebraska) and Jared Leto (Dallas Buyers Club) we on hand to receive the Virtuoso honor. During the ceremony celebrating the actors, Leto was heckled by an audience member who took issue with a straight man playing a trans woman. Leto, according to a report in The Hollywood Reporter, engaged with the woman, respectfully, and countered that such logic closes doors on LGBT artists as well, saying that that argument would exclude a gay actor from playing a straight man. Interesting stuff. (Elsewhere at the festival, Jonah Hill presented his The Wolf of Wall Street collaborators Leonardo DiCaprio and Martin Scorsese with the Cinema Vanguard Award. The Hollywood Reporter has coverage.)

The Bridges of Madison County
The novella has been adapted into a stage musical, with a book by Marsha Norman and a score by Jason Robert Brown (The Last Five Years), and it's now in previews. I saw it last weekend and can't wait to tell you about it. (Check back on opening night, February 20, for my review.) Until then, check out these bits of press: Brown, a pianist first and foremost, talks about writing the show on guitar; supporting player Hunter Foster (Hands on a Hardbody) talks about some of his favorite roles; watch stars Kelli O'Hara (Far from Heaven) and Steven Pasquale (The Intelligent...) sing the powerful "One Second and a Million Miles," and below, watch as Pasquale talks about his character and sings a section of the thrilling "It All Fades Away." (If the video doesn't appear below, click here to watch on YouTube.)Visit bridgesofmadisoncountymusical.com to learn more and to purchase tickets.


Remembering Philip Seymour Hoffman
We lost a great one on Sunday. Hoffman was a celebrated and much beloved stage and screen actor who appeared in, among so many other great works, Almost Famous, The Ides of March, The Master and Death of a Salesman. Hoffman also worked with Aaron Sorkin on Charlie Wilson's War and Moneyball, and in Time magazine, Sorkin writes about his bond with the late actor. Here is it, your moment of zen: