Award Season Updates
Oscars—The Academy Awards will soon be upon us, and on Monday the nominees (most of them, though not all) gathered for the annual nominees luncheon. This is the festive event at which nominees take their "class photo" (see above). The Oscars blog covered the event in real time, sharing tons of great photos with fans. (I've been updating my Oscars Pinterest board throughout the season.) The Hollywood Reporter also covered the event (obviously), taking readers inside the soiree, including a glimpse of the Oscar nominee sweatshirt, as well a photo gallery of the red carpet and pics from its own fiesta later that night. Seriously. In addition to taking the class photo, Oscar nominees filled out the "in their own words" questionnaires; check out part one, which includes responses from Bradley Cooper (American Hustle), Michael Fassbender (12 Years a Slave) and Sally Hawkins (Blue Jasmine), and part two, which includes responses from Jared Leto (Dallas Buyers Club) and screenwriter Terence Winter (The Wolf of Wall Street). 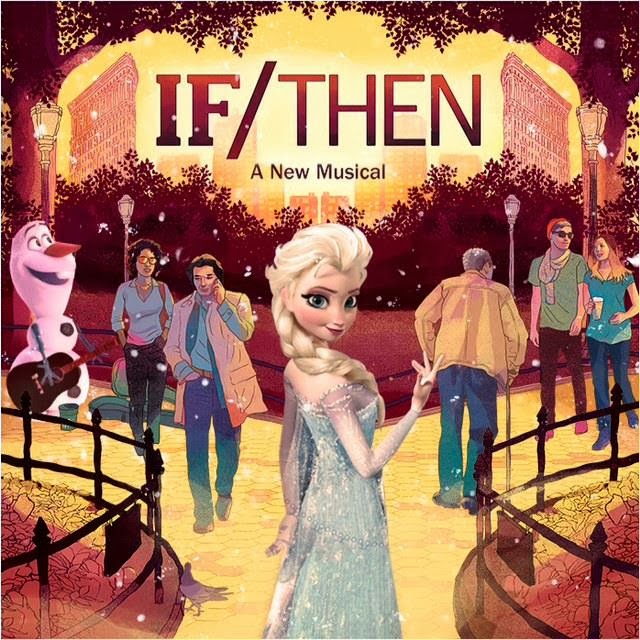 Exciting Oscars news: Idina Menzel will perform the Oscar-nominated song, "Let It Go," from Frozen, at the Academy Awards. Menzel, who was in the original company of Rent and won a Tony for Wicked, is returning to Broadway next month in If/Then, an original musical from Tom Kitt (a genius) and Brian Yorkey, who scored big with their hit, Next to Normal. Menzel's If/Then friends celebrated the Oscars news by giving the show's artwork a Frozen facelift! Tune into the Academy Awards on Sunday, March 2, to watch/hear Menzel blow the roof off the Kodak theater.

In other Oscars news, The Hollywood Reporter's Scott Feinberg brought us two more Oscar Breakdowns, one of the Best Supporting Actor race, and the other taking a look at those vying for Best Actress. 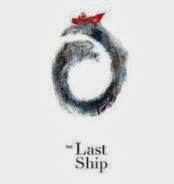 Sting's The Last Ship Sails to Broadway
The former Police frontman (a.k.a. Gordon Sumner; also, his produce stand in Tuscany has good courgettes) has been collaborating with Next to Normal scribe Brian Yorkey and Red and Hugo writer John Logan to develop The Last Ship, a new musical. This week, we learned it will bow on Broadway this fall. Joe Mantello  (Dogfight) is at the helm, and Steven Hoggett (American Idiot, Once) will choreograph the musical, while will play at the Neil Simon theatre. Previews are scheduled to begin September 30, with opening night set for October 26. But that's not even the best part. Initial casting includes Michael Esper (American Idiot, Assistance) and Aaron Lazar (A Little Night Music)! Playbill has details, including the dates for the musical's pre-Broadway try out. (Want a "first look" at the show? Tune into PBS on Friday, February 21, when a recording of a The Last Ship concert (featuring Sting and recorded at the Public), will be broadcast.) 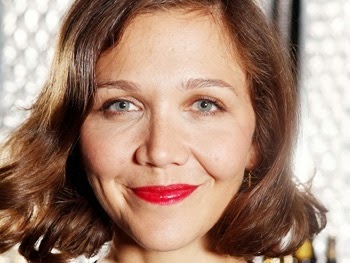 Tonight Show and Late Night News
Guests for the first week of The Tonight Show with Jimmy Fallon, which debuts on February 17, have been announced. Jerry Seinfeld, Will Ferrell, Bradley Cooper, Justin Timberlake and First Lady Michelle Obama are among those who will welcome the late night show back to New York. Playbill has details.

We also learned that former SNL player Fred Armisen will be the band leader for Late Night with Seth Meyers, which debuts on February 24. Meyers, also an alumnus of SNL, announced the news on Twitter, when he tweeted a picture of the Late Night band. He clarified the announcement, saying, "Fred will curate and lead the band, and continue to run it even when he's off shooting Portlandia." In addition, Meyers's guest for his first week have been announced. Joining the previously announced Amy Poehler will be, among others, Vice President Joe Biden, No Man's Land and Waiting for Godot stars Ian McKellen and Patrick Stewart, Lena Dunham and John Mayer. The Hollywood Reporter has the full list of guests. Stay up to date on Late Night news (like the fact that Stefon might make an appearance) by following @LateNightSeth. 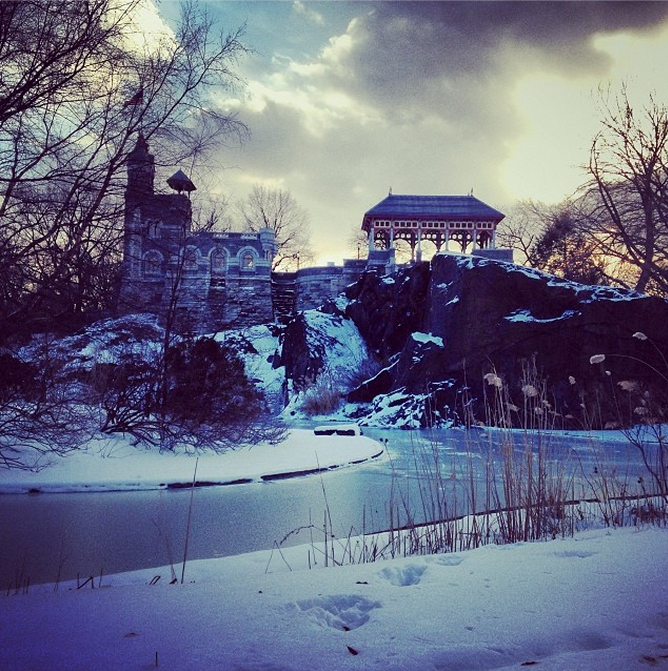 Shakespeare in the Park Announced
Put those winter worries away and rejoice: The 2014 Shakespeare in the Park season has been announced. From June 3-July 6, the Public will present Shakespeare's Much Ado About Nothing, starring Lily Rabe and Hamish Linklater as Beatrice and Benedick. (The two pair well together, and have performed together in, among other plays, Seminar.) Much Ado will be directed by Jack O'Brien (Catch Me if You Can). Later in the summer, we'll be treated to John Lithgow tackling the title role in another of Shakespeare's masterpieces, King Lear. That production, to be directed by frequent Shakespeare interpreter Daniel Sullivan, will run July 22-August 17. Visit shakespeareinthepark.org for additional details.

Hugh Jackman to Host Tonys
With perennial host Neil Patrick Harris actually starring on Broadway this season (in the upcoming mounting of Hedwig and the Angry Inch), it's shouldn't shock anyone to learn that Jackman, a two-time Tony winner himself, will once again serve as host of Broadway's biggest night. (This will be the Les Miserables star's fourth time hosting the event.) The Tony Award nominations will be announced on April 29; winners will be revealed and honored a little over a month later, on Sunday, June 8. Does anyone want to place bets as to whether or not some of his Les Mis co-stars will make surprise appearances during the telecast? Obviously, Broadway favorite and Les Mis standout Aaron Tveit would be welcomed, as would Tony winner Eddie Redmayne. And you know Anne Hathaway won't want to miss an opportunity to gain musical theatre street cred. Alas, though, this announcement means no Blackwell-Benanti ticket. Playbill has more about Jackman. (In other theatre award news, we learned that the Drama League Awards will be held May 16. Broadwayworld.com has more.) 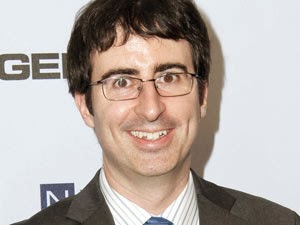 John Oliver Returns to TV, Via HBO
We've known for several months now that the former The Daily Show correspondent (and a great substitute anchor) is getting his own show. Now we have more details. For example, the show has a title: Last Week Tonight with John Oliver. Clearly, they were going for cheeky. In addition, the show boasts Tim Carvell, The Daily Show's (now former) head writer as its head writer, and will debut on the pay cable station on Sunday, April 27, at 11pm. Vulture has more.


Remembering Sid Caesar
Mr. Caesar was a comedy legend, and the world is a little less funny because he's gone. The revered entertainer, who was not only a stage and screen star but also a veteran, passed away on Wednesday at age 91. His writers' room on Your Show of Shows and Caesar's Hour was one of legends, launching the careers of Mel Brooks, Carl Reiner, Woody Allen, Neil Simon and more. (Mel Brooks said, "Sid Caesar was a giant - maybe the best comedian who ever practiced the trade, and I was privileged to be one of his writers and friends." And Carl Reiner said, "We've lost the greatest monologist, pantomimic, sketch comedian TV has ever known! Word GENIUS if oft misused but not so here. HAIL CAESAR.") His humor was smart and never base or crass. And he was a master of language, double talk and all. A couple of years ago, a modern master of language, Aaron Sorkin, wrote affectionately about Mr. Caesar, but no one wrote better than the man himself. Do yourself a favor and read his memoir, Caesar's Hours: My Life in Comedy, with Love and Laughter, check out these photos of him from the last 30 years, and then get a peek into Mr. Caesar's writers' room and watch Jon Stewart honor the man with this moment of zen: