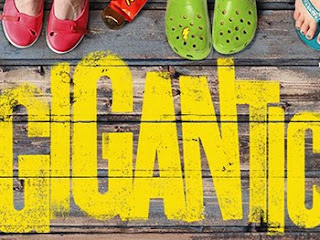 The show begins with Robert (Max Wilcox) at a drum kit, showing off his skills and letting us know he doesn't see anything wrong with being overweight. We soon shift to Camp Overton (get it?), a "fat camp" run by Sandy (Leslie Kritzer) and Mike (Burke Moses), who've been engaged for 15 years. We then meet Robert's fellow campers, including Taylor (Ryann Redmond), a girl who, unlike most of the other campers, actually wants to be there.

Gigantic is about being body positive (to use today's buzzy phrase), loving yourself and your look independent of other people's opinions. That's a good message, one magazines try to preach (although they usually do so just pages after a fashion editorial featuring a model that is "sample size"), and certainly one young people would do well to learn. With clever lyrics and a decent pop score (lyrics by Randy Blair; music by Matthew roi Berger), Gigantic, directed by Scott Schwartz, is entertaining, though I have my gripes.

There were too many time-sensitive cultural references for my taste (such references leave a show with no shelf life), and Blair and Tim Drucker's book is riddled with racial and ethnic stereotypes (like the black guy acting tough, or the Jewish kid having an almost offensively Jewish-sounding name). Plus, the dialogue smacks of the way adults think today's teens speak, rather than sounding authentic. (I hope that's not authentic, otherwise we're raising a generation of teens who do not know how to form a sentence.)

Another gripe: Not every person who is overweight is obsessed with eating candy (or eating, in general, for that matter). It's a cliche and trite at this point to have a running gag about the Camp Overton campers sneaking "contraband" onto the premises. Sometimes it can be funny, but there's a sequence in which the teens sexualize the candy, which is outrageous in all the wrong ways, and it's sophomoric, low-hanging fruit, anyway. 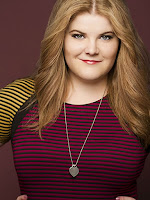 If there's a silver lining to the just-OK show it's Kritzer's and Redmon's performances. Leslie Kritzer (The Memory Show) is hilarious as the peppy camp leader. She brings a loopy, fearless zeal to the role that makes you smile whenever she's on stage. And the wonderful Ryann Redmond (Bring It On, If/Then) gets to shine as Gigantic's leading lady, showing off what a great voice she has. Her performance is one of the few grounded performances, and I appreciate her bringing a character, and not a caricature, to life.
Gigantic Leslie Kritzer musical off-Broadway Ryann Redmond vineyard theatre