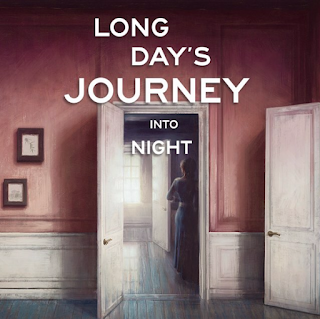 For Eugene O'Neill's Long Day's Journey Into Night I give you a short review.

The long journey is a day in the life of O'Neill's stand-in family, the Tyrones: patriarch James (Gabriel Byrne); matriarch Mary (Jessica Lange); older son James Jr, or Jamie (Michael Shannon), and younger son, Edmund (John Gallagher, Jr.), who is, most agree, O'Neill himself. (The Tyrone family maid, Cathleen (Colby Minifie), is also around here and there.) In this personal work, O'Neill revisits his family to work through, understand, or maybe exorcise something from his past. Maybe's it's his tumultuous relationship with his father or brother, or maybe (probably) it's his elusive mother, who, in Long Day's Journey Into Night, is a dope fiend who slips in and out of reality.

Plenty of people will tell you that plays are meant to be heard and seen, not read. Arguably, that rings true for Shakespeare, Albee, Pinter, Beckett, and others. Reading another of this season's "classic play" revivals, Arthur Miller's A View from the Bridge, for example, you don't get nearly as much as you do when you see it performed. Reading Long Day's Journey Into Night, however, you can feel like you're reading a novel. O'Neill included detailed stage directions, describing each emotional change (and there are plenty), and so it almost is better on the page than on the stage.

Save for great performances. Director Jonathan Kent has assembled an all star cast. It's great watching stage and screen veterans Byrne (In Treatment) and Shannon (Grace, Uncle Vanya) go toe-to-toe, and the two even seem to lumber around the stage in much the same manner. Despite their differences, it's still very much like father like son. Tony winner Gallagher (Spring Awakening, Jerusalem, The Newsroom) is terrific, pacing Edmund's journey. He is tentative at first, not wanting to admit what he knows is true, and then romantically careless as the day turns into night (and the whiskey bottle gets emptier and emptier), not letting anyone off the hook. (I especially like the way he looks at his older brother, when both their guards are down; Edmund worships his brother—if only Jamie lived up to Edmund's point of view.)

But it's Jessica Lange, the Academy Award, Emmy, Golden Globe, and SAG Award winner who is, unsurprisingly, the stand out. Watch as she dances around the stage while Mary dances around the issue. Watch as she wipes away hairs like she's wiping away the cobwebs in her mind. Listen as her voice changes on a dime, betraying the confusion and fog that keeps Mary in her own world. She is mesmerizing, and definitely the reason to see this play, rather than read it.
Broadway classic Eugene O'Neill Gabriel Byrne Jessica Lange john gallagher jr Michael Shannon play revival