April 29, 2016
This post has been updated to include the latest Tony eligibility rulings.

At the Ballet
The Wall Street Journal spent a day with New York City Ballet principal dancer Tiler Peck as she took company class, spent some downtime with husband and fellow dancer Robbie Fairchild, and performed the Emeralds section of Balanchine's Jewels. Meanwhile, the New York Times caught up with Fairchild and Tony-winning choreographer Christopher Wheeldon to talk about their return to NYCB. Wheeldon's latest work, American Rhapsody, choreographed on Peck and Fairchild, is set to Gershwin's "Rhapsody in Blue," and will premiere at NYCB's spring gala next week. In related news, tour dates have been announced for the upcoming national tour of An American in Paris. The tour will officially launch October 25 in Boston. Playbill has details.

Tony Awards Update
The Tony Awards Administration Committee met for the final time this season to determine Tony eligibility of slew of shows that opened this spring. Unless noted below, eligibility is consistent with opening night credits. This means that actors billed above the title are eligible in the Lead Actor categories, while actors billed below the title are eligible in the Featured Actor categories. Tony nominations will be announced May 3, and the Tonys will be handed out on Sunday, June 12. Tony winner James Corden (One Man, Two Guvnors) will host the ceremony. Read the official press release for more. 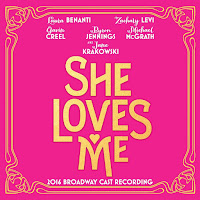