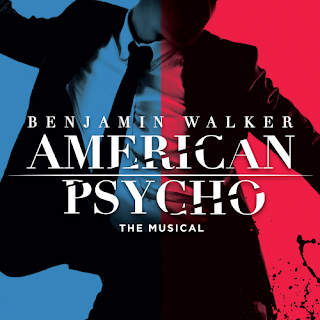 I had never read Bret Easton Ellis's novel, American Psycho, but I had seen the movie, liked the movie, and was excited for the musical stage adaptation. I walked out of American Psycho the musical thinking that it was too sanitized. I was expecting something bloodier, more gory, more violent. The next day, I re-watched the movie (I had never returned the videotape). While there were a couple more violent sequences, and the violence felt more intimate (and therefore more brutal), it wasn't the Tarantino-esque blood fest I remembered. And so while I realize my expectations were unfounded, I find I'm ambivalent about this production. There are elements to praise, but it doesn't thrill like a thriller should.

In much the same way John Hughes and his films captured the 80s teenager, novelist Ellis captured the late 80s yuppie. That flush urbanite who was too cool for school, snorted cocaine out of boredom, and went on a killing spree after hours.

Well, maybe not everyone did that last part.

American Psycho, with a book by Roberto Aguirre-Sacasa (Spider-Man: Turn Off the Dark) and a fine and effective (if underwhelming) 80s pastiche score by Duncan Sheik (Spring Awakening), focuses on Patrick Bateman, the titular psycho whose surname is, surely, not coincidentally similar to another famous psycho. Bateman (Benjamin Walker) is 26. He lives in New York City's Upper East Side circa 1989, and works at a Wall Street investment firm. Like his "friends" and colleagues, he is obsessed with appearances, and, in the opening number, he tells us about the obsessive rituals he goes through to maintain his. (Wearing a custom eye mask while tanning; no cologne on the face because it makes you look old, things like that. By the way, I did not mind that the meticulously sculpted Walker (Bloody Bloody Andrew Jackson, Cat on a Hot Tin Roof) was in nothing but a pair of white briefs while filling us in. No ambivalence there. And this is not the only time he appears in just his tighty-whities.)

These superficial tendencies are just par for the course, and everyone around him—his girlfriend, Evelyn (Helene Yorke), his colleagues and competitors (one in the same, really), society, writ large—engage in and enable this behavior, except for Jean (Jennifer Damiano), his secretary. She is different from the nondescript Patrick. She's not disaffected. She is hopeful, and she sees a different side of Patrick. This makes her the heart and soul of the show. (A difference between the show and the movie: Patrick sees and interacts with Jean outside of the office before their big night together; it works because then that big night earn its payoff.)

American Psycho strikes me as the antithesis of Rent. Both Rent and American Psycho concern twenty-something New Yorkers in the late 80s. Rent focused on downtown and the downtrodden (Jean, by the way, lives downtown) while this is all about the uptown, new–money yuppies Mark and Roger rail against. Patrick and his posse have everything ("everyone has a hard body; everyone has money," Evelyn says) and, of course, they're so bored. So some go shopping for designer wears, some do drugs, and Patrick kills people. He has to find something to lift the existential crisis that comes with constantly trying to fit in. (It's hip to be square, after all.)

Since vanity infects everyone (save Jean) in American Psycho, it should come as no surprise that this is one of the most stylized shows I've ever seen. The gray-scale color scheme is appropriately blank and bleak and interchangeable, much like Patrick himself. Part of the problem is that Patrick is not a remarkable person. He's not someone who leaves an impression. (His main foe, Paul Owen (Drew Moerlein) continually mistakes Patrick for someone else.) He could disappear—some people are better off not being in this world, Patrick says—and no one would notice. Is he Patrick Bateman, or is he an icon, some symbol of something that people think about, believe in, worship? Is he really there, or is it just some impression of him? Interestingly, in the movie, this key question is something Patrick poses to himself right off the bat; in the musical, it's part of the climax.

For all the show's style (scenic design by Es Devlin; costume design by Katrina Lindsay; lighting design by Justin Townsend), there are some choices and 80s nods in this Rupert Goold (King Charles III) production that baffle me or feel like pandering. There are two instances of the actors using hand-held microphones. There is no apparent reason for this. It's jarring, and, in the first instance, creates unnecessary stage business. Then there are the 80s nods. Some things, like Patrick listening to something on his Sony Walkman, are part of the character, and are true talismans of the era. Other references, like when Patrick sings the praises of Donald Trump's The Art of the Deal, seem like pandering to American audiences during this circus of an election cycle. One could argue that it's also part of Patrick's character, and I partially buy that. I guess my problem is more with the audience's reaction to these things.

Moreover, sometimes I couldn't tell if there was a bad sound design, or if it was designed to have a bad mix as a way of telling us something. For example, when they're all at Tunnel, a nightclub, the music reverberates all the way through the house; I could feel the bass in the last row of the mezzanine. It helps to blur the senses, just like it would in a club. But elsewhere, you can barely decipher the lyrics. Again, this might have been a stylistic choice, something to help us grasp the tempest in Patrick's mind. Or maybe it was just a sound design that needs tweaking.

Another oddity: the under-utilization of Tony winner Alice Ripley (Next to Normal). She appears as three characters, Svetlana, Patrick's dry cleaner; Mrs. Wolfe, a realtor; and Mrs. Bateman, Patrick's mother. Of course, Ripley is interesting to watch on stage, but she has little stage time, and there's not much priority given to any of her characters. Mrs. Bateman gets the most attention, but even she doesn't seem to have any impact on Patrick. The character seems tossed in, and it just seems strange to have someone as established as Ripley on board as, essentially, a featured ensemblist. (Patrick's mother does not figure in the film, for those keeping score.)

Ripley's Next to Normal co-star, Jennifer Damiano (Venice, Spider-Man), gives the most engaging performance. Perhaps that's because her character is the only one who isn't insufferable, a psychotic killer, or both. Damiano is able to portray Jean as someone who is sweet but not a pushover. She's involved in the opening flash, which is mirrored in the closing tableau, though the tone is different. (No spoilers.) Her appearances in those opening and closing moments give hints of who she is and the impact she has on Patrick.

Yet, the ending, like in the movie (probably also the novel), is enigmatic. It's unsettling, it's unresolved. You're not entirely sure what just happened (because we have an unreliable narrator in Patrick), and you're not entirely sure what will happen next. Kind of like how these people might have felt at the time, about to enter the 90s, looking down the barrel of a new millennium. And that's part of my struggle with the show. There's a foreboding sense of doom in the air, and Patrick is reacting by coldly killing people (or is he?) but American Psycho just doesn't feel dangerous.
Alice Ripley American Psycho Benjamin Walker Bret Easton Ellis Broadway Duncan Sheik Helene Yorke Jennifer Damiano musical Roberto Aguirre-Sacasa Rupert Goold