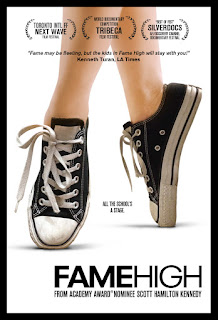 As the title of the documentary suggests, we're getting an inside look at a Fame-like high school, this on the renowned Los Angeles County High School for the Arts (LACHSA). The film focuses on two incoming freshmen, Ruby (an actress) and Zak (a musician), and two outgoing seniors, Grace (a dancer) and Brittany (a musician and singer/songwriter).

These kids are easy to relate to as we watch them go through the same struggles in the same circumstances we've either known personally or have heard tell of for years. there's the "Mama Rose" stage parents; the culture clash in which the children's passion for the arts flies in the face of her culture's view of success and what's honorable; the supportive parents who make sacrifices but only know how to do so much; and the teachers, some of whom help, some of whom seem to be a massive power trip, and everything in between.

What's perhaps more interesting about Fame High, though, what separates it from previous documentaries of its ilk, is watching these kids being filmed in this day and age. They've grown up watching reality shows so they know how to work the camera. And they know that instant fame (or notoriety) is possible, though fleeting. Watching them struggle with wanting the attention but seeing that it's not as easy as going on some competition reality show is telling of where we are as a society.

It's also fascinating because they seem so mature - common among kids in their position (see some of our child stars) - but at the end of the day, they are high schoolers. Filmmaker Scott Hamilton Kennedy shows the many aspects of these kids' lives, not just when they're in the studio. He shows their immaturity (appropriate, though, since some of the kids are just 13!), like when Ruby, the freshman actress, doesn't quite grasp the concept of an arts education (she thinks some of the acting exercises are silly), and their high school heartbreak, both of which would be present no matter the high school.

(It should be noted that Kennedy crafts a compelling narrative throughout as we watch this kids try, fail and pick themselves up and try again.)

Through this film, Kennedy makes the argument that arts education in the regular school system is important, that the arts can greatly enhance people's lives. I agree 100%, and in that spirit, I leave with this quote from Broadway's Jay Armstrong Johnson (Hands on a Hardbody): "I'll never understand why funding for the arts is the first thing to get cut. Music is math. Theatre in English. Tech is science. Dance is physical education. The arts are everything."

Visit famehighmovie.com to learn more about the film, the students (and where they are now) and how you can take action to support arts education in your community. You can also stream the film online.