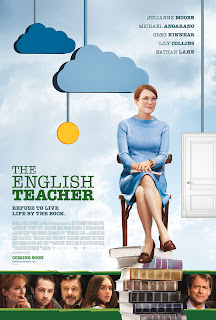 Ah, classic virtue. The noble sacrifice. Both are pillars of the works we studied in English class in high school, no doubt, and both are concepts taught by Linda Sinclair, the titular English teacher in the new movie written by Dan Chariton and Stacy Chariton and directed by Craig Zisk.

Linda Sinclair (Julianne Moore) fell in love with classic literature at an early age, eschewing other social pursuits in favor of burying her nose in her favorite books. Fittingly, she became an English teacher and has been trying to inspire her students for years. She seems to have everything worked out, from her lesson plans to her budget to her diet (something swiftly shown in a montage featuring narration by Fiona Shaw), but when Jason Sherwood (Michael Angarano), a former student now in his early 20s comes back to town, things get a little nutty.

Sherwood has been struggling to make it as a playwright in New York and after trying unsuccessfully to have his play produced, he returns home to suburban Pennsylvania. Sinclair always believed in him and after reading his play, The Chrysalis, she determines to produce it at the school. (The Chrysalis—get it? Someone is going to transform.) With little delay, she finds herself in a web of trouble after (predictably) sleeping with Jason. (Not to mention the trouble she makes for herself after over extending herself financially in order to produce the play.)

There’s a flamboyant teacher (played, of course by Nathan Lane, who, with a beard, is looking rather Stephen Sondheim-esque) thrown into the mix; a somewhat prudish principal-vice principal wife-husband team (played with delicious camp by the marvelous Jessica Hecht and Norbert Leo Butz) to contend with; and, to throw another fly in the ointment, Jason’s single father, Dr. Tom Sherwood (the appealing Greg Kinnear).

The English Teacher won’t keep you in suspense, but the plot isn’t the point. The kooky characters, as their morally questionable behavior plays out, are played with such sincere, over the top zeal that you’ll simply forget about the trite goings on and delight in the fun fluff.

(Of course, the movie’s about an English teacher so literary allusions abound. And, like most films with literary leanings, the lesson the teacher is teaching at the beginning foreshadows (or, in this case, loudly telegraphs) the critical decision points of the story. Here, the lessons come mostly from A Tale of Two Cities.)

You may find yourself particularly taken with the charming and game cast. Hecht (The Assembled Parties) and Butz (Dead Accounts) are a riot, both making a full, five-course meal out of appetizer-size roles. As the drama teacher Carl Kapinas, Lane (The Addams Family) does exactly what you want him to do, especially when, after recounting an encounter with Sondheim himself, he starts singing “Putting it Together,” the classic song about the art of making art, from Sunday in the Park with George.

Kinnear shines as a father who is “just doing the best he can” with his passionate, artistic son. As the son, Angarano (the cutie pie who played young William Miller in Almost Famous) is laid back and seductive. (Or maybe that was just me. His shaggy hair, the scruff on his face…)

But the movie hinges on and belongs to the luminescent Moore (The Kids Are All Right). Though she is playing a frumpy character (here her frumpiness is signaled by her big, outdated glasses), Moore herself is a glamorous and sophisticated lady and bring that gravitas to her roles. In The English Teacher, we believe that she actually has the smarts to teach but also the social insecurities to get into a love triangle with a 25 year-old former student and a chirpy high schooler. Moore seems to relish playing this unraveling character, and makes you glad you came along for the ride.

The English Teacher opens on May 17. Watch the trailer below.