The Substance of Fire 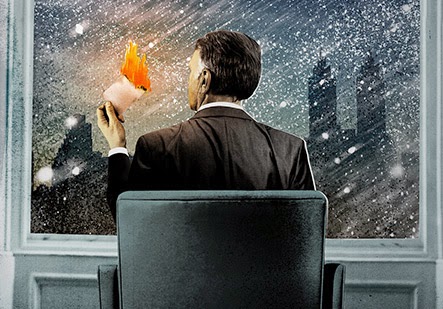 Here we are with another tale of two acts. First produced in 1990 at the Long Wharf Theatre and subsequently produced off-Broadway at Playwrights Horizons in 1991, The Substance of Fire is being presented for today’s audiences by Second Stage.

Written by Jon Robin Baitz (Other Desert Cities), The Substance of Fire is about… well, I’m not entirely sure. After watching the first act, I thought this was another instance of Baitz looking in on families, dysfunctional though they may all be. But the second act shifted focus a bit, focusing on the curmudgeonly patriarch, and it was not nearly as interesting (though director Trip Cullman (Murder Ballad) did his best to find provocative moments).

Set in 1987, the first act sees the Geldhart children, Sarah, Martin and Aaron (Halley Feiffer (Tigers Be Still), Daniel Eric Gold and Carter Hudson, respectively) gathered in a conference room at their family-owned publishing house. They are not actively in one another’s lives, though it would be inaccurate to described them as estranged. They are gathered because their father, Isaac (John Noble) has summoned them to help shape the direction of the foundering publishing company. Aaron, an MBA who is the only one of the three children to actually work at the company, wants to publish a sure-to-be best-seller that’s on the lighter side of literary works. Isaac refuses and instead wants to publish yet another tome exploring yet another aspect of the Holocaust. This seemingly central conflict is gripping.

It’s not just family politics, although there is plenty of that at play. As in so much of Baitz’s work, it’s more than that. Here, it’s a generational conflict. Isaac's was a generation that could not comprehend modern American life—call it survivor’s guilt or something else, but there was a class of people who were so myopically obsessed with their cultural experience—or lack thereof—that they lost touch with reality. They lost their sense of humor, as Aaron accuses Isaac of doing.

Though the Holocaust and accompanying survivor’s guilt Isaac feels puts a specific date on this and places the characters within specific generations, much of the arguments about culture—about substance and human connection—are vitally relevant to today, which actually puts things in an interesting perspective: In the late 80s people were bemoaning the things about art and society that we bemoan today. Isaac, for example, thought that the lowering of literary standards would mean the end of our kind. But here we are, nearly 30 years later and, while we still bemoan the same things, we’ve survived. Maybe we’re gonna be OK.

I thought all this and more during the first act and intermission, and then I was thoroughly gobsmacked by the tonal shift in the second act, which, taking place three and one-half years later, was basically a two-hander between Isaac and a social worker, Marge (Charlayne Woodward).

You could argue that the ensuing heated discussion between Isaac and Marge does have connections to the familial politics explored in act one, though it’s a bit of a stretch. Moreover, the fact that the family was gathered to discuss an important matter was what was engaging and urgent. This meeting between an old, gruff man and a social worker didn’t seem to have any stakes.

Maybe it’s just another generational thing, this one being my age and generation as compared to Isaac’s, but I found the children’s predicament to be intriguing; that’s where the blood lies. I felt little nary a connection to Isaac throughout act one so when Baitz asked me to care about him and what happens to him in act two, I just couldn’t. I felt nothing, except a longing for the tedious back and forth to be over. I kept hoping something unnaturally dramatic would happen, with the children flying in for an all-out brawl, but the only battle raging was inside Isaac’s mind. It has potential to be an exciting bout, but Marge is not nearly a worthy opponent, and so I lost interest in finding out the winner. Baitz can write family dramas but for my taste, interlopers-as-main-characters are unwelcome in family epics, and I wished he had stuck with the set up of the first act. You know, for the children.
Jon Robin Baitz off-Broadway play Second Stage