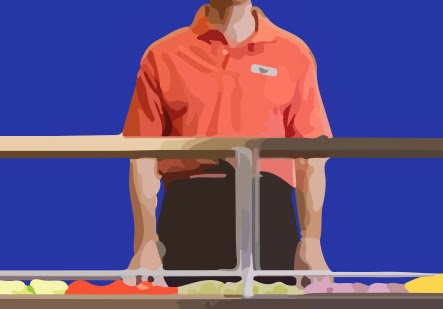 Who are today’s heroes? Bess Wohl’s play, American Hero (directed by Leigh Silverman (Violet)), tries to explore that question by checking in on the lives of three “sandwich artists” working at a sub shop.

At rise, the three artists are being interviewed by their potential employer, the franchise owner, Bob (Daoud Heidami (Bengal Tiger at the Baghdad Zoo)). Sheri (Erin Wihlemi (The Great God Pan)) is 18, shy and meek. Ted (Jerry O’Connell (Seminar)) is married with children, and the MBA is looking for work after being fired from his high finance job. Jamie (the always winning Ari Graynor (The Performers)) is a young single mom with attitude to spare. They find themselves in a bit of a pickle when Bob disappears on the day of the shop’s grand opening.

The set up is mostly an excuse for Wohl to delve into a character study, trying to find out what we’re made of, and what it means to be heroic in the modern world. Both the situation and the interpersonal entanglements that ensue test everyone’s mettle, making for a alternately funny and thoughtful new play.


American Hero is mostly well-written and certainly relevant (I happened to see it the day fast food workers began their strike), though it could use a little fine-tuning to try to find its point of view. It seems like Wohl is struggling between making a political statement and presenting a fascinating character study. The lack of perspective keeps this otherwise fine play from hitting the mark, though there is potential for growth.
Ari Graynor off-Broadway play Second Stage