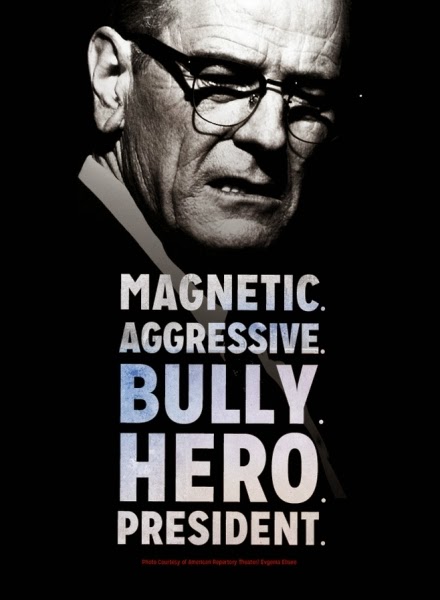 My dear readers, I don't know if you know this about me, but I have a Master's degree in political management, and a Bachelor's in both theatre and political science. You would think that All the Way, Robert Schenkkan's new play about our 36th president, Lyndon Baines Johnson, would be right up my alley (kind of like Gore Vidal's The Best Man). And in theory, you would be right. But as I sat through All the Way, now playing at the Neil Simon Theatre, I felt like I was back in undergrad, sitting in my Southern Politics class and reading V.O. Key.

Maybe it's just because I've studied politics, and this era and its effect on the south in particular, but there isn't any intrigue. Schenkkan has a wonderfully fascinating political figure in LBJ (Bryan Cranston)—who never wanted to be president, by the way; he was after the speakership—and a pivotal moment in history (both our nation's and our political system's), and is wasting it on a simple, dramatized history lesson. What a shame.

Moreover, as we watch LBJ over the course of (quite possibly) the most significant year of his life (November 1963, right after President Kennedy was assassinated, through Election Night, November 1964), Schenkkan and this production take no point of view on the goings on. (Although, since history is written by the victors, I suppose you could say that's the play's P.O.V., but I think that's a weak argument in this case.) And for those familiar with political history and the history of the Civil Rights Movement (over that one year, LBJ and Dr. Martin Luther King, Jr., (Brandon J. Dirden) worked to pass the Civil Rights Act of 1964), nothing is illuminated.

That's not to say the play is bad or should be ignored. (Although the final moments are anti-climactic and the closing tableau is rife with juvenile theatrics.) It's just that I wanted more—something heftier. It also means that were it not for the star power of Cranston, who played the role when All the Way ran last year at the American Repertory Theater in Boston, this would not be on Broadway. It might stay on the regional theatre circuit, but it wouldn't have made it all the way to Broadway, if you'll excuse my lazy pun.

The Breaking Bad star does fine if not overwhelmingly impressive work. Cranston (Argo) sheds Walter White's inner rot and takes on LBJ's southern charm/bombast with zeal. Under Bill Rauch's direction, Cranston (who is making his Broadway debut but has many theatre credits under his belt) is joined by a 19-member ensemble. Michael McKean (who actually appeared in The Best Man) pulls double-duty (as do most of the cast) as J. Edgar Hoover and Senator Robert Byrd; Beverly Hills 90210 dad James Eckhouse makes his Broadway debut as Secretary of Defense Robert McNamara and a handful of legislators; Betsy Aidem (The Metal Children) is Lady Bird Johnson and others; and standout William Jackson Harper (Modern Terrorism) portrays SNCC leader Stokely Carmichael.

Perhaps the one interesting takeaway is the comparisons one can draw between Johnson and House of Cards' Frank Underwood. Both begin in the House and through luck, politicking, maneuvering and perhaps some unsavory methods, work their way up the ladder. In fact, House of Cards creator Beau Willimon (himself a former political operative), has said that Johnson was one model for Underwood.

As in House of Cards, in All the Way we see the plotting, the back room wheeling and dealing, the exploitation of everything at your command in order to get what you want. It all adds some interest but, ultimately, there is still no weight to this piece.
Broadway Bryan Cranston play politics