The 87th Academy Awards were handed out on Sunday night! The full list of winners in below but first, as always, some fashion. 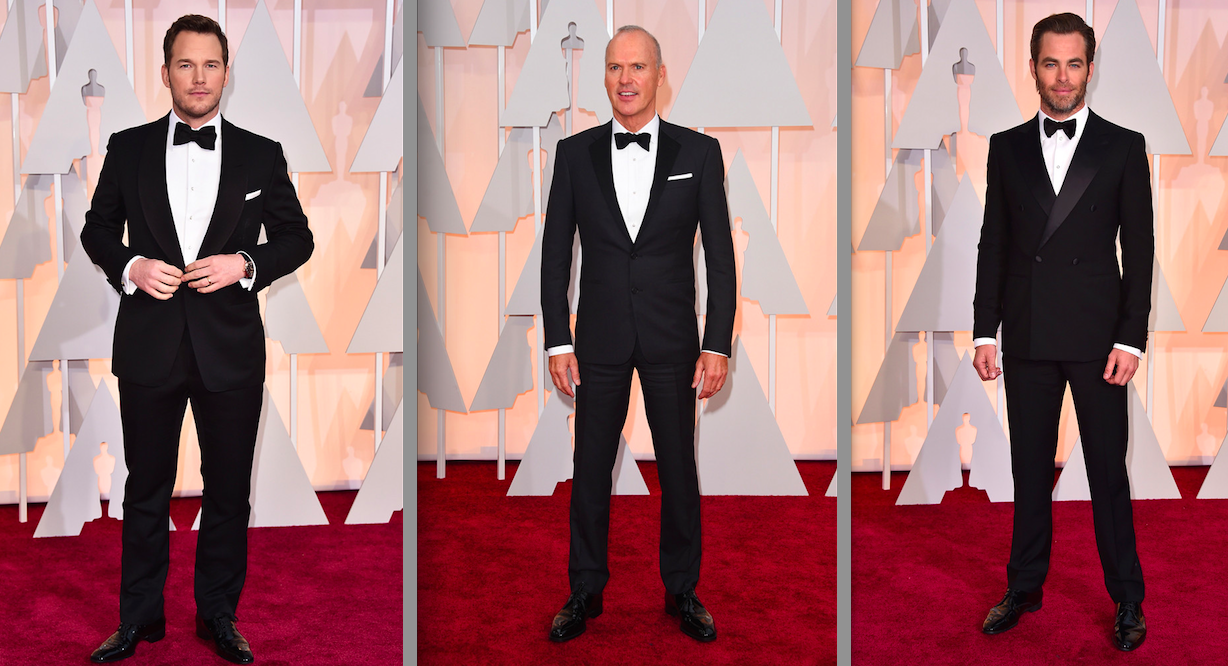 We start with some men. I found the red carpet to be rather tame this year, nothing exceptionally good or bad, but the men looked great. So first up are three men who went for classic looks and looked great. From left to right: Chris Pratt in Tom Ford; Michael Keaton in Ralph Lauren; and Chris Pine in Armani. What a way to start! 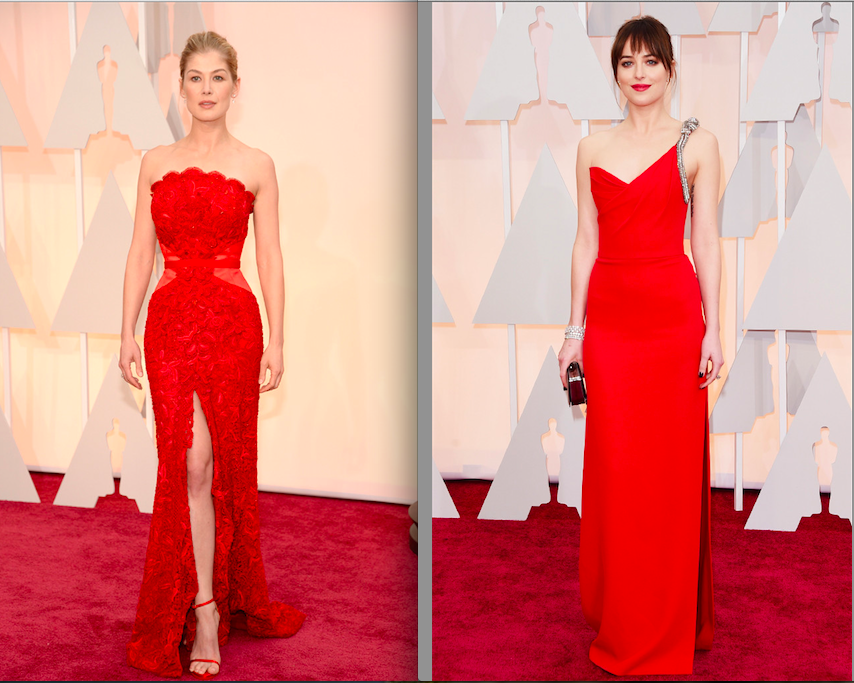 Next, one of the evening's trends: ladies in red. Above left is nominee Rosamund Pike in Givenchy, and above right is presenter Dakota Johnson in Saint Laurent. Another colorful trend was yellow. Below left is Jennifer Hudson in Romona Keveza, and below right is Emma Stone in Elie Saab. The two ladies are wearing significantly different shades of yellow. Hudson looks great in hers while this particular hue doesn't complement Stone's coloring. 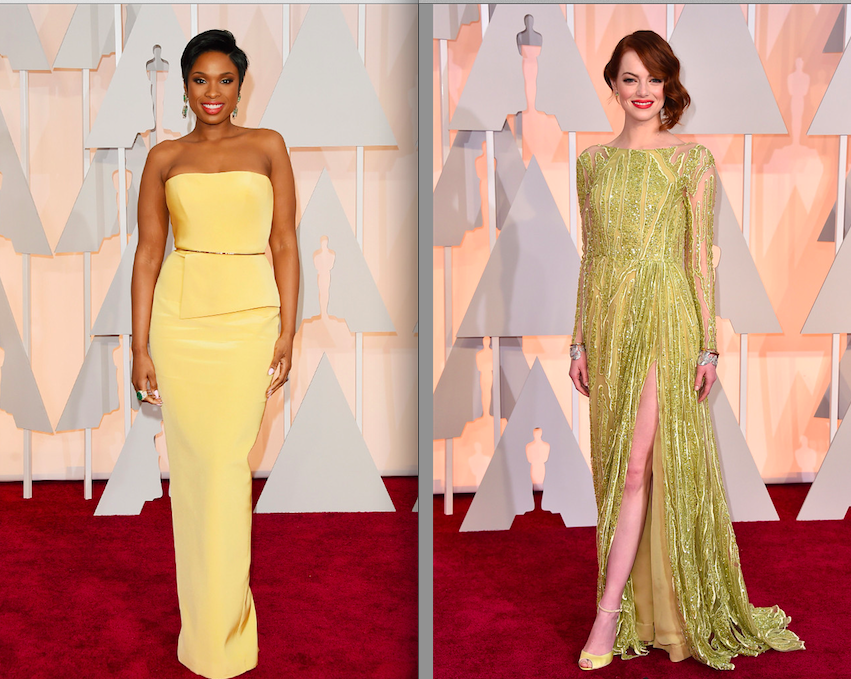 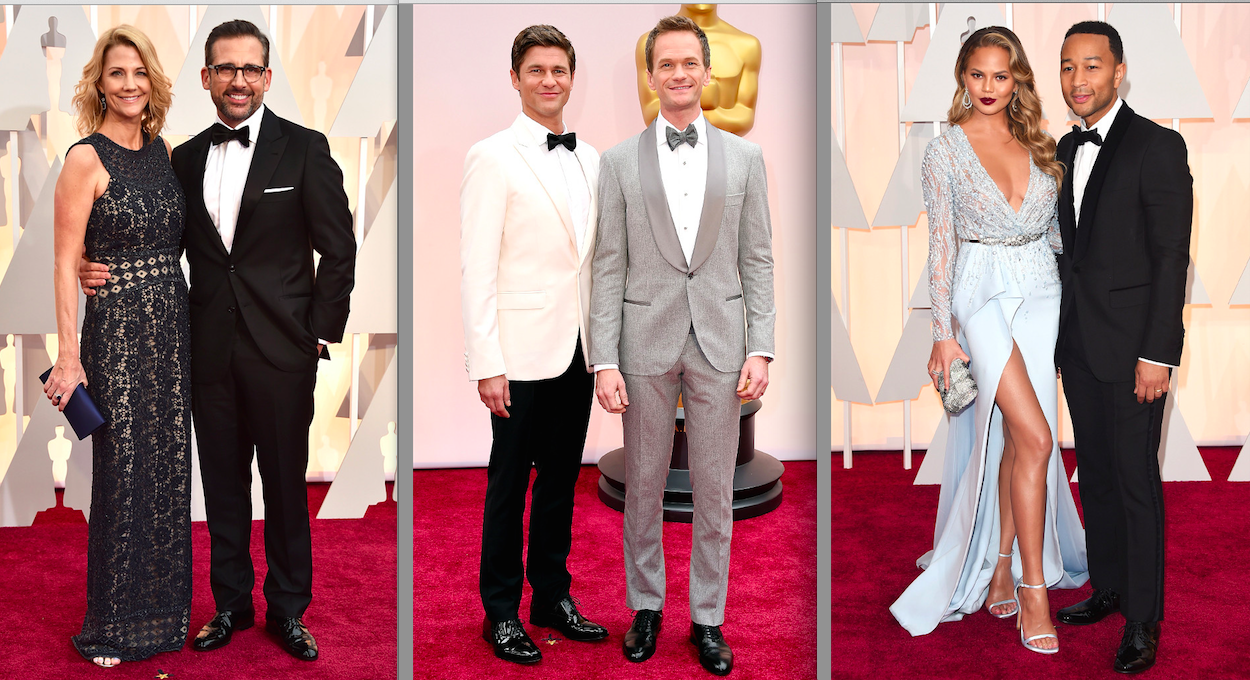 Several couples made statements on the red carpet. Above are three of them. Left to right we have Steve and Nancy Carrell; David Burtka and host Neil Patrick Harris; and Chrissy Theigen (in Zuhair Murad) and John Legend. From stunning couples to a couple of presenters who stunned. Below left is Cate Blanchett in Maison Margiela Couture by John Galliano, and below right is Lupita Nyong'o in an intricate Calvin Klein Collection gown that boasts 6,000 pearls. 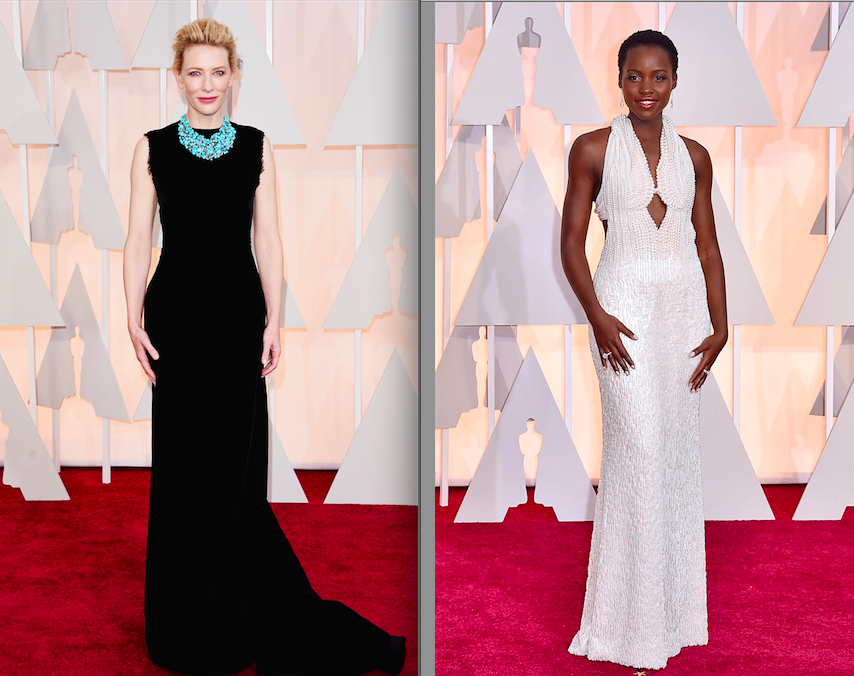 Of course, not everyone knocked it out of the park. Below are two beauties who just missed the mark. On the left is Naomi Watts in Armani Prive. Her red carpet choices usually say she likes fashion, so it isn't surprising that she took a risk. However, the top just doesn't work. If the black bandeau had been the entire top, making the dress look like a skirt and top, this would have been better. And on the right is Scarlett Johansson in Versace. The dress is phenomenal. The hunter green is rich, and the structure and lines are sexy and entirely flattering. But the statement necklace ruins the look. Coco Chanel famously said that before leaving the house, women should look in the mirror and take one thing off. Johansson should have listened. 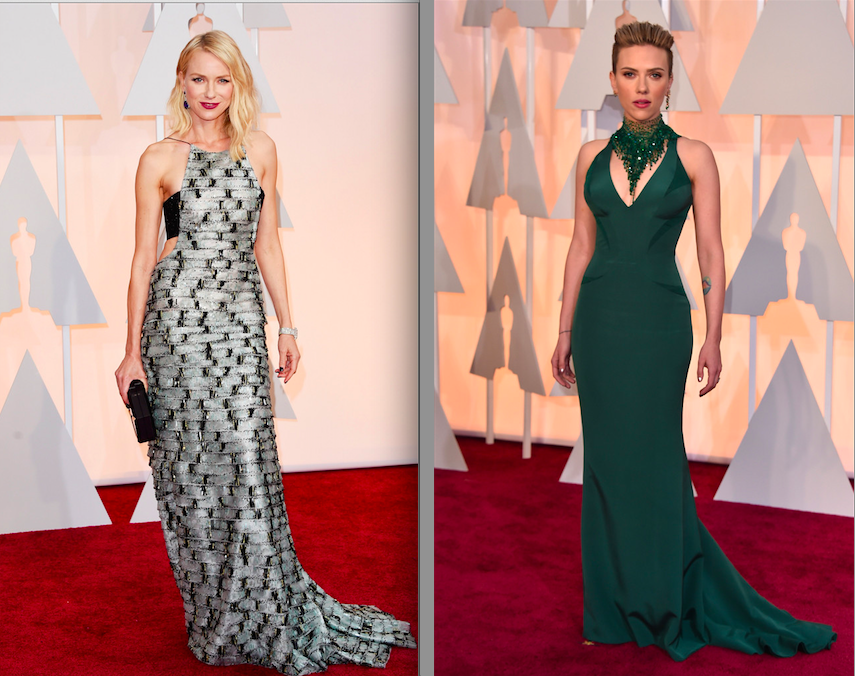 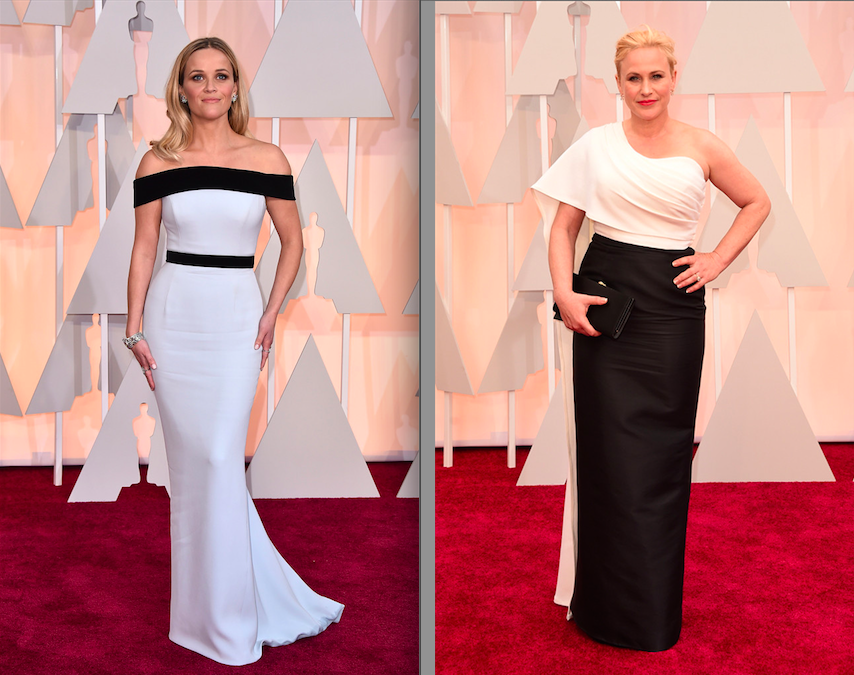 Back to trends. There was black and white all over the red carpet. In particular, note Reese Witherspoon (who's been looking fabulous throughout award season and knows how to pose on the red carpet) in Tom Ford, and Patricia Arquette in Rosanna Getty. Below are three more men, and unlike the classic gentlemen at the top, these guys went for something a little different. From left to right: David Oyelowo in Dolce and Gabbana; Eddie Redmayne (who's always flawless on a red carpet) in Alexander McQueen; and Common in Prada. Let's hear it for the boys! 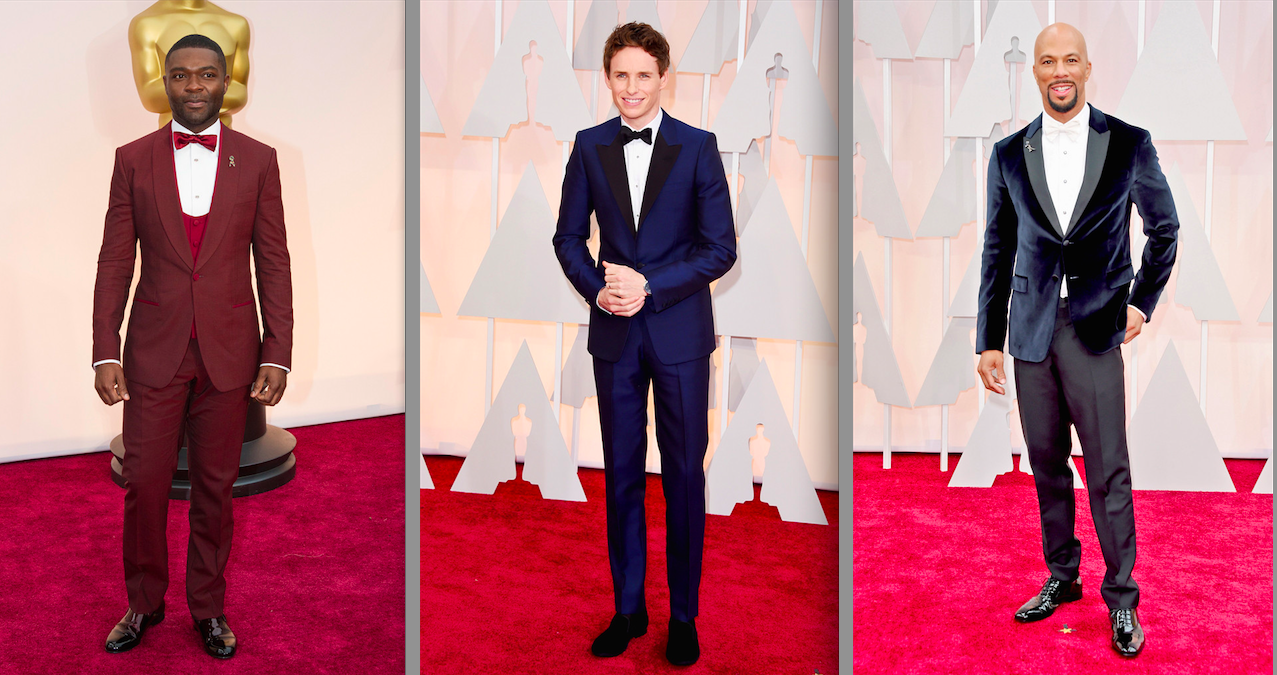 I couldn't quite decide on just one best dressed lady, so I'm choosing two. Above is presenter Anna Kendrick looking perfect in Thakoon. The color complements her skin tone without washing her out; the sparkly collar adds some pizzazz; the cut out in the top adds some sex appeal; and flow of the skirt is fun and flirty. My other pick, at right, is the winner of the night, Julianne Moore in Chanel. Moore likes fashion, and this dress combines the classic feel of a Chanel column dress with exceptional detailing that makes Moore stand out. Bravo!

Without any further ado, here are the winners (noted in bold typeface and with an asterisk):

Best Picture
This wasn't too surprising after the film also won in the Screenplay and Director categories (see below), though I'd say I was pulling for Boyhood. Also because the Academy loves movies about movies/actors. Not to take away from the film - it's good, I just felt Boyhood more.

Best Actor in a Leading Role
Bravo to Tony winner Redmayne! What an affecting performance from a gifted and versatile actor.

Best Actress in a Leading Role
It's about damn time one of the best actresses of our time won an Oscar. Maybe there's hope for Leo...

Best Actor in a Supporting Role
Good job, J.K., and to everyone else: call your parents!

Best Actress in a Supporting Role
Hell yeah, Patricia Arquette. This was a strong category, but Arquette's performance was beyond compare. And another hell yeah for her awesome acceptance speech. She's like our very own Sheila Franklin.

Best Director
I'm not mad about this; Birdman came together because of the director's vision. I'm glad Linklater and Anderson were nominated, though, because their respective works were phenomenal. 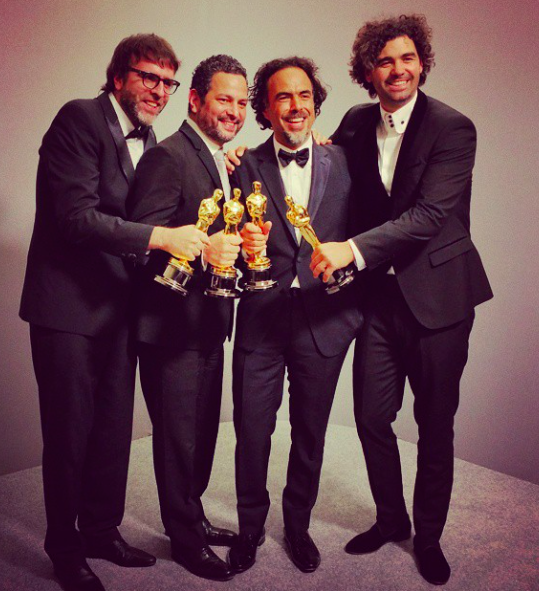 Best Original Screenplay
I'm so conflicted about this. Nightcrawler is a fantastic film, and it's a true shame that this is the only nomination it received. The Grand Budapest Hotel is wonderfully original and creative. I guess the screenplay for Birdman is good. I was really pulling for Budapest or Nightcrawler.

Best Adapted Screenplay
I haven't seen this, so I can't reasonably say whether or not this win is a deserving one. Still, I liked Moore's heartfelt and inspiring speech. Stay weird.

Best Cinematography
Obviously. With no disrespect to the other talented nominees, was there any way Lubezki wasn't going to win? The cinematography is the crowning achievement of Birdman.

Best Sound Editing
Best Sound Mixing
Those of you who've seen Whiplash will have no problem understanding this win, even if, like me, you're not entirely sure what sound mixing is.

Best Documentary Feature
This is a documentary about Edward Snowden. A feature film (non-documentary) about him, starring Joseph Gordon-Levitt, will be out later this year.