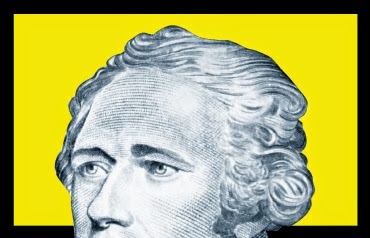 The tagline for Hamilton is, "Who lives / Who dies / who tells your story." It's taken from a lyric in Lin-Manuel Miranda's new hip-hop musical about founding father Alexander Hamilton. And though the show is called Hamilton, the story that's told is much grander, helping us understand the others who lived, died and have yet to have their story told.

Inspired by Ron Chernow's biography, Alexander Hamilton, Miranda explores the treasury secretary's motivations (by writing the show and playing him on stage), who he was as a person and not just what he did. He doesn't stop there, thankfully. Miranda also gives equal attention and insight to Hamilton's foil, Aaron Burr (a captivating Leslie Odom, Jr (Leap of Faith, tick, tick...BOOM!)). This sensational musical is as much about Burr as it is about Hamilton.

Indeed, it seems that to understand Hamilton we need to understand Burr. Tiny but significant bits of their respective biographies are the same, yet the two men approached life differently. Hamilton was tenacious and a firebrand. Burr advised, "talk less, smile more." Hamilton would not hesitate to seize a moment (or a movement). Burr preferred to wait and see. As a student of political management, the difference between the two couldn't be more clear: Burr was a politician, Hamilton was a leader. (Miranda uses a different comparison: Hamilton is the act first, ask question later Macbeth; Burr is the indecisive Hamlet.) Whereas Hamilton was deeply convinced of his beliefs and fought for them, Burr didn't truly believe in anything; he waited to see what the people thought and then calculated his next move. I find this difference to be utterly fascinating, and as important today as it was when our country was taking shape.

A people fighting for their freedom and a nation in the throes of growing pains is, of course, the setting for Hamilton. We see how Hamilton found kindred spirits in the Marquis de Lafayette (a wonderfully playful Daveed Diggs), Hercules Mulligan (Okieriete Onaodowan) and John Laurens (Anthony Ramos). (The three actors take on different roles, to equally great effect, in act two.) We see Hamilton support and get in the good graces of George Washington (Christopher Jackson (Holler If Ya Hear Me)). And, because it's the revolution, we meet King George.

Brian d'Arcy James as King George is one of the most hilarious performances I've ever seen. Miranda, director Thomas Kail and choreographer Andy Blankenbuehler (all of whom frequently collaborate, including on Miranda's debut, In the Heights) give King George a grand entrance, and then the exceptionally talented James (Next to Normal, Macbeth) steals the show. Miranda (Merrily We Roll Along, tick, tick...BOOM!) helps by writing "You'll Be Back," but James's execution is on the genius level.

But that's not all in this ambitious show. Who tells your story? Hopefully the people you love most. For Hamilton, one of those people was Eliza Hamilton, Alexander's wife. One of the well-to-do Schuyler (pronounced "Skyler") sisters, Eliza (a terrific Phillipa Soo) becomes completely enamored of Hamilton the night they meet. She is introduced to her beau by her sister, Angelica (Renee Elise Goldsberry (The Good Wife, Good People), on fire), who also fancies Alexander but sets her feelings aside. (She explains why with stunning verbal dexterity in "Satisfied.") Through Eliza's eyes, we see that Hamilton's story is really a love triangle, with Alexander, Eliza and "the work" taking up the three corners.

(Side note: these relationships are further clarified by the creative team. In particular, I love the scenic design by David Korins and the tight lighting design by Howell Binkley.)

The themes of any show and its socio-policital commentary is one thing, but this is still a musical, and Lin-Manuel can write a song. His lyrics are smart. They're evocative. His beats (orchestrations and co-arrangements by Alex Lacamoire) will get you moving in more ways than one (and the ensemble doesn't stop moving - bravo to them and their kinetic energy). 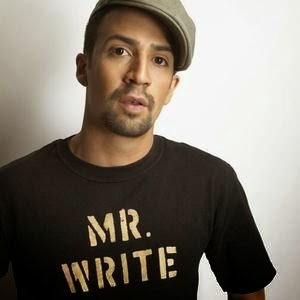 Somehow, it feels just right to have this story told through hip-hop. Hamilton comes out singing about his one shot, how he's young, scrappy and hungry, just like his country. He made his name by writing non-stop (see 51 federalist papers); he expressed what was happening to him, made people listen and made a difference by writing. That same mindset (the need to express, to communicate, if you will) is what elevates good hip-hop to an art form. This music styling seems appropriate because it makes this story feel alive, feel like it's happening now, like it's accessible and truly part of our lives. I don't think I'd feel that way—I don't think you'd feel that soul—if the score were entirely of the Rodgers and Hammerstein variety.

Moreover, Hamilton does what theatre is supposed to do. It holds a mirror up to society. It teaches us something. It asks us to think—or think differently—about ourselves (whether as individuals or as a nation). It has a point of view. It is unflinching. And, oh yeah, it's also entertaining as hell. Expectations are almost impossibly high for this opus, which Miranda has been working on for six years, but damn it if he and his Hamilton company don't soar past them and leave you invigorated, hungry and ready take your shot.