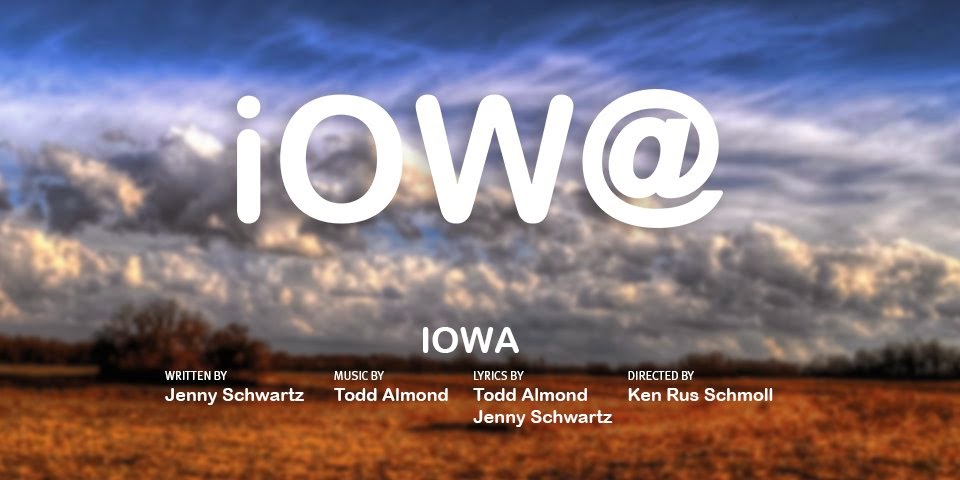 So much of our lives are "lived" online, for better or worse. Have you ever stopped to wonder the cost of all this virtual reality? In Jenny Schwartz and Todd Almond's new absurd musical, Iowa, the writers present a dizzying, at times overwhelming, representation of online lives. (Credits: Schwartz—book and lyrics; Almond—music and lyrics.)

Their characters spew lines at each other (no one actually connects), with their verbal assaults sounding like an online comments board. Through their communication, we see a satirical depiction of how easy it is to fall down an online rabbit hole, flitting from distraction to distraction. These characters say anything that comes to mind, never mind what the people on the other end of their selfish monologues feel or think or have to say in response.

Indeed, the logo for the show, with the lower case "i," reinforces the selfish nature we as a society have taken on thanks to 21st century technology; the "i" generation (see: iPhone, iPad, et al.), thinking only of ourselves.

Iowa is filled with momentary distractions, much in the way your online experience might be, whether the distraction is a pop ad or you taking a break from the strenuous task of reading a Buzz Feed listicle to watch the cutest cat video ever. We've become a people who do not communicate with one another but rather a people who talk at one another, often with misappropriated passion, vitriol and carelessness. It's no wonder no one in Iowa is happy.

Iowa features Jill Shackner (who has a lovely voice) as Becca, a teenager who, at rise, comes home to find her mother (Karyn Quackenbush) has just gotten engaged to her Facebook friend, whom she knew in high school but hasn't seen in person in over 20 years. The engagement is the impetus for Becca and her mom's move to the titular state. In settling her affairs and trying to make sense of the changing world around, Becca encounters a number of characters (and I do mean characters), some real, some fictional. The ensemble includes Kolette Tetlow; Carolina Sanchez (a standout as Becca's friend and other characters); Lee Sellars; Cindy Cheung; Annie McNamara; and April Matthis.

Directed by Ken Rus Schmoll, the verbal assault style of dialogue might be unsettling for some audience members, but if you buy into the conceit, that this is basically a comments board come to life, you'll get into the rhythm and find yourself laughing and cringing at the absurdity of our world.
Internet Iowa Jenny Schwartz musical off-Broadway online technology Todd Almond web