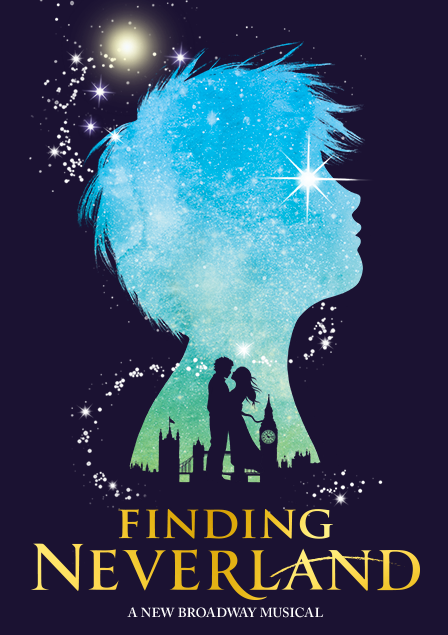 Finding Neverland tells the story of J.M. Barrie, the Scottish playwright who wrote the beloved play, Peter Pan. Like the movie upon which the musical is based, this is the story of a man rediscovering his imagination. How disappointing, then, that the production would come off as dull and unimaginative.

What makes it even more disappointing is that the show is directed by Tony winner Diane Paulus (Hair, Pippin), who is usually so sensitive, creative and curious. There are some elements that seem Paulus-esque. Throughout, the actors move and lift one another around the stage to give the appearance of flight. At first, I wondered why the actors weren't simply on wires, but then I realized that Paulus is asking the audience to use its imagination, just as Barrie implores the sullen Peter to do when they meet in the park. (More on the specific plot points in a moment.) Similarly, rather than go for broke with highfalutin visual effects, Paulus and her creative team opt for flashlights on sticks or other such scrappy prop pieces. I like that challenge, but those are just moments. Taken as a whole, the musical does not capture the imagination.

Which is a shame. I always liked the movie, and I've thrilled over other Peter Pan origin stories, in particular, Peter and the Starcatcher. I find it interesting to watch Barrie (Matthew Morrison) meet Sylvia Llewelyn Davies (Laura Michelle Kelly) and her sons, George, Peter, Jack and Michael (played by a rotating cast of kids; I saw Sawyer Nunes, Aidan Gemme, Christopher Paul Richards and Alex Dreier, respectively), and through his relationship with them reignite that childlike curiosity, that willingness to suspend disbelief and allow your imagination to run wild. By letting go of the inhibitions with which adults arm themselves, Barrie is able to create the boy who won't grow up.

Unfortunately, James Graham (book) and Gary Barlow and Eliot Kennedy (score) didn't get the imagination memo. The pop-inflected score (from the pop world artists) doesn't match the epic scope of Barrie's and the children's imagination. Meanwhile, the book features several unnecessary bits and cheap, eye-roll-inducing jokes. Moreover, Mia Michaels's choreography is boring (and she does nothing with Morrison, who's trained as a dancer). The show has been gestating for a while, going through various changes in the creative department. Perhaps that's why it comes off as unfocused and uneven.

The show was warmly received  at the American Repertory Theater in Cambridge, Massachusetts. In fact, Bryan Cranston, who won a Tony Award for his performance in All the Way, a show that had its pre-Broadway run at A.R.T., is a named producer of the show. I don't get it. The audience at the performance I attended clapped riotously for the TV star, though. I don't mean Matthew Morrison. I mean Kelsey Grammer, who most recently appeared on Broadway in La Cage aux Folles. I've never liked him, and he doesn't do anything here to change that. He seems such a curmudgeon himself that it's not fun to watch him play the villain. Grammer plays Charles Frohman, Barrie's American patron who inspires the Captain Hook character. Grammer spends his time on stage mugging for the audience, most hideously in a groan-worthy joke about Cheers.

If there's a silver lining of the production (other than the colorful, trippy curtain) it's seeing Matthew Morrison on stage. Morrison is returning to Broadway for the first time since catapulting to fame in Glee. The talented, handsome performer earned a Tony nomination for his performance in The Light in the Piazza, and was also in the acclaimed revival of South Pacific. I didn't get to see Morrison in either of those, so I was particularly pleased to finally see him on stage, where he proves he really does have a beautiful voice, unlike some of his auto-tuned Glee cast mates. Morrison is an appealing leading man (I especially liked the part when he ripped open his shirt to show off his hairy chest), and it's really quite a treat to watch his playful performance.
Broadway Diane Paulus Finding Neverland Kelsey Grammer Matthew Morrison musical Peter Pan