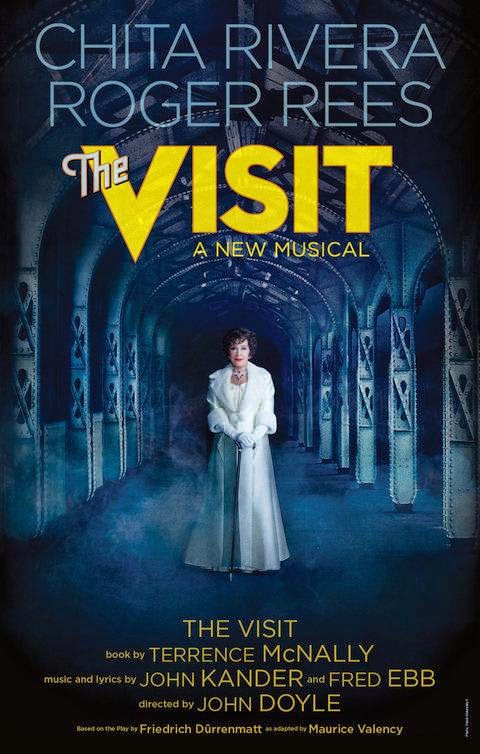 There are violent violins. There is a sexually explicit ballet serving as a prologue. There are yellow shoes. It all adds up to one dark, sexy, gothic romance in Kander and Ebb's The Visit.

The titular visit is made by Claire Zachanassian (a commanding and entrancing Chita Rivera (The Mystery of Edwin Drood)), who is returning to her hometown, this time with money to spare, seeking revenge on her lover from so many years ago, Anton (an understated Roger Rees (Peter and the Starcatcher, The West Wing)). Claire was scorned by Anton when they were teenagers, and she has never forgotten the sting. Though she's gone on to marry (several times; she widows well, she says) and amass a fortune to make Bill Gates jealous, she still wants to be with her true love.

And so she devises a way to gain revenge—not so much on Anton but on the town that ostracized her—and get her man. Claire returns to the town, which is a shambles, and offers to give the town ten billion marks, as well as two million for each individual resident. In exchange, all she wants is Anton's life.

You see, in delivering that ultimatum, Claire extends her vengeance to the town and townspeople who'll have to live with their "just" decision. She is exacting revenge for the way they treated her, a young woman wearing her sexuality with pride, owning it, only to be shunned and shamed. Shame on the townspeople. Those townspeople, by the way, are on stage almost the whole time, sitting in judgment of everything that's happening. Young Claire (Michelle Veintimilla) and Young Anton (John Riddle) are also on stage most of the time, shadowing their older selves, so the love, passion and scars remain ever-present.

The Visit, based on the eponymous play by Friedrich Durrenmatt as adapted by Maurice Valency, is an efficient musical, the last one John Kander and Fred Ebb (Chicago, Cabaret) wrote together. (It features a book by Terrence McNally (Mothers and Sons), direction by John Doyle (Company, Wings) and choreography by Graciela Daniele (Ragtime, The Mystery of Edwin Drood).) The songwriting duo had been working on the show for years, developing it with and for Ms. Rivera. It paid off.

Similar to Hand to God (stay with me), you don't often see things like this on Broadway. While The Visit does have source material, said material doesn't have the kind of cache that most adaptations carry, making it original-ish. It's dark. It's decidedly adult. It's challenging, asking the audience to grapple with the idea of justice, just as the townspeople do.

Those townspeople are played by a topnotch ensemble, including standouts Mary Beth Peil (Follies, The Good Wife), Jason Danieley (Next to Normal) and David Garrison (By the Way, Meet Vera Stark, Married with Children). Also of note is Scott Pask's chilling scenic design (the gray vines winding their way around the set are magnificent) and Japhy Weideman's beautiful lighting design.

This is one of those rare intelligent, intimate musicals that is palpably without flash. It relies on an intriguing story, a smart, complex yet accessible score and stellar performances, which is to say it is sadly an outlier in today's Broadway market. Run to see this while you can.