Fish in the Dark 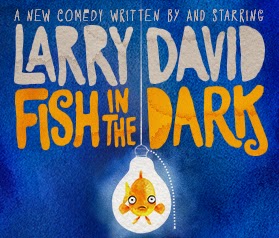 Over two acts, David and (an impressive) company take part in the Larry David schtick. Yes, there is a story with specific plot points (we begin with a phone call about Norman (David)'s father being in the hospital; all sorts of familial shenanigans ensue) but it mostly seems to be an excuse for Larry David to do Larry David on stage. (The title, by the way, refers (broadly) to the little things that happen in families, the little things that remain unaddressed and instead fester away and develop into petty family grudges.)

Tony nominee Anna D. Shapiro (The Motherfucker with the Hat, This is Our Youth) directs an enviable cast, most of whom don't get to show off just how good they are as they are confined by David's world. Still, it's nice to see these talented players (among others—it's a big cast) on stage: