City Ballet: The Goldberg Variations and West Side Story Suite

I kicked off my New York City Ballet spring season with an All Robbins program, and it was a great one. 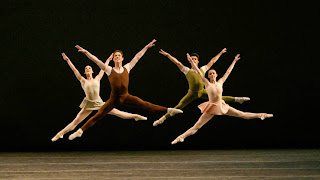 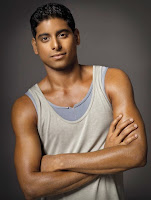 First up was The Goldberg Variations, a Jerome Robbins ballet set to an 18th century Bach composition. One of the things I have always loved about Robbins's choreography is the way you see the music in his movements. His choreography is what the music dictates. The music for this piece has the published title of "Aria mit verschieden Veraenderungen," with "veraenderungen" typically translated as "variations." Repertory notes state that "veraenderungen" could also be translated as "alterations" or "mutations." Robbins's ballet plays with all three translations. 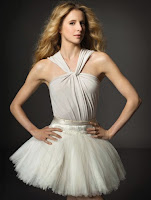 The piece begins with Faye Arthurs and Zachary Catazaro appearing in baroque-period costumes and dancing the theme. After the theme comes, of course, the variations, split into two parts. Part one, featuring soloists (including Lauren Lovette and Taylor Stanley) and a large corps, is playful and youthful. The dancers are in more modern costumes (by Joe Eula): the women wear simple leotards and skirts; the men wear unitards over white shirts; everyone is in a different color. The choreography is reminiscent of other Robbins ballets. Indeed, there were moments when I thought I was watching an excerpt from Interplay; another time moves appeared to be lifted from West Side Story, the other ballet on the bill. 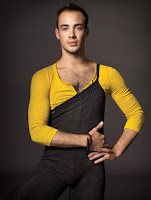 Later, in part two, more mutations and alterations can be found. These variations are led by principals Tyler Angle, Gonzalo Garcia, Sterling Hyltin, Maria Kowroski, Tiler Peck and Amar Ramasar, and are a little more mature than the variations in part one. The Maria-Tyler pas de deux are particularly earthy and grounded. Yet there is great details to be found; look for the staccato way in which Tyler moves his hands along Maria's arms. It's a simple, seemingly minute detail, but it adds depth to their pas de deux. (Tyler does get to come to life in a brief solo section.) Sterling and Amar's pas de deux is transfixing, as the two pair so well together. They are completely in synch on stage; when he lifts her, she looks like putty in his hands. And her lithe, sinewy figure can't help but add a quiet grace and elegance to her dancing. Meanwhile, the Tiler-Gonzalo pas de deux appears to be Robbins's answer to George Balanchine's Tschaikovsky Pas de Deux, with each dancer spinning and jumping with unparalleled precision and speed. (Tiler's fouettes will blow you away.)

Throughout part two, the dancers add to what were originally simple, modern costumes. A corset here, puffy sleeves there, an added ruffle or jacket later. Just as it seems like the ballet concludes, a brief coda begins. All the dancers are now in baroque-period costumes and when they part, Faye Arthurs and Zachary Catazaro reappear, only this time they are in the sleek, simple modern wears. They dance the theme once again as Robbins comforts us, reassuring us that things vary, are altered or mutate, but we always come back to the beginning. It's OK, encouraged, in fact, to explore and experiment when you're rooted in such a strong foundation. (And a hearty bravo to pianist Susan Walters and her virtuosic playing.) 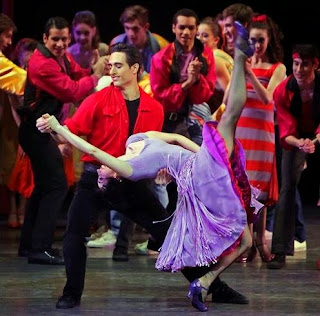 With The Goldberg Variations (so called, repertory notes state, because Johan Gottlieb Goldberg "happened to be the private harpsichordist to Count Keyserling, who commissioned the music") running close to 90 minutes, there isn't much time (or patience among some of my fellow audience members) for anything else. Except for the West Side Story Suite, one of the greatest ballets in the Company's repertoire.

If you know me, you know I think West Side Story, with its music by Leonard Bernstein, lyrics by Stephen Sondheim, book by Arthur Laurents and direction, choreography and conception by Robbins, is the greatest musical in the canon. The music is glorious. The story stands the test of time (as you might expect, since the source material was the centuries-old Shakespeare classic, Romeo and Juliet). The choreography is explosive. It doesn't get much better than that in the musical theatre world. 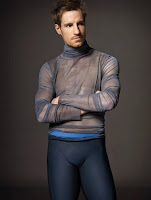 And it doesn't get much better than seeing the New York City Ballet, home to the greatest dancers in the world, dance the suite. The suite came about after the success of Jerome Robbins' Broadway, the tribute show that showcased Robbins's work on the Great White Way. A West Side Story suite was included in the 1989 retrospective, and in 1995, Robbins re-staged the suite for NYCB, creating the West Side Story Suite we know today. While there have been revivals of West Side Story on Broadway, they don't compare to what happens at the State Theatre.

The suite includes the "Prologue," one of the greatest opening numbers ever; "Something's Coming," in which Sondheim gives us, "It may come cannonballing down from the sky..."; the dance at the gym (obviously the best part); "Cool," in which we get to see the Jets shine; "America," in which Anita is at her sassiest; the rumble, a beautifully, poetically choreographed fight; and the "Somewhere" ballet, which brings harmony to the chaos.

Our cast on Wednesday night included Adrian Danchig-Waring as Tony; Justin Peck as Bernardo; Andrew Veyette as Riff (he's been playing Riff for a while, and for good reason); Mimi Staker as Maria; and Gretchen Smith as Rosalia (the Sharks girl who serves as the catalyst for "America"). 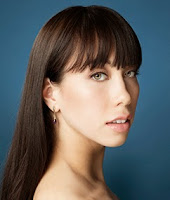 The West Side Story Suite always thrills and moves me, never more so than when the terrific soloist Georgina Pazcoguin is dancing Anita. I never got to see Chita Rivera play this role on stage, but I think watching Gina is the next best thing. Go see Shakespeare the way it was meant to be played—go see NYCB perform the West Side Story Suite.

Watch below as Gina and Andy talk about West Side Story Suite: